The Marrow of Life 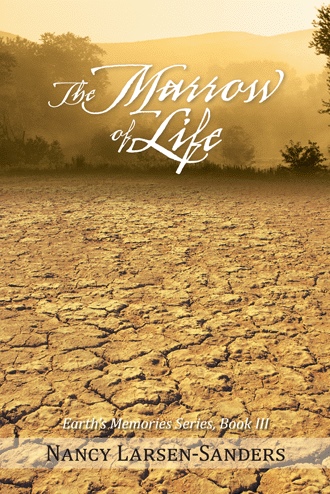 At the calf pen, she slipped through the gate before the calf could rush out. “You are officially weaned. Don’t you realize that, baby?” She carried the bucket high because of the calf’s routine. The little bull charged, butting between Deborah’s legs, looking for milk, probably due to some vague memory of his four-legged mother. She reached out her hand and let him find her fingers. The small mouth pulled with strong suction, the tongue raspy and wet. She used her fingers to guide the baby’s mouth into the bucket. He took in some of the milk and butted at the bucket in the way he would have done his mother’s milk bag, succeeding only in thrusting his nose into the milk. He sneezed milk all over her jeans and backed off, working at cleaning his nostrils with his long tongue. After the choking and sputtering had stopped, Deborah offered her fingers again, leading him to the milk. This time, he drank without butting. “That’s better,” she said. “I think you’re getting the idea.” His long eyelashes flickered with each swallow. Crows cawed in the orchard, and Deborah heard the frightened squeal of what must be a young rabbit. The sound was suddenly cut off, and the crows became raucous. “That little fellow didn’t learn enough from his mama,” she whispered. A squeal of a different kind sounded in the corral, and she looked up to see Dumper kicking his heels high at nothing. Spring had arrived. She laughed when the pony kicked too close to one of the big team horses and was given a nip on the rear. The activity in the corral was only a temporary diversion. Deborah was rubbing at her pounding head. The calf was drinking close to the bottom of the bucket, and when he was finished, her next task would be The Grasshopper, the combine that required a going-over before harvest could begin. Also the cornfield needed cultivation, more rows of green beans had to be put in, the setting hens—she heard Jonathan and David scream. She cocked her head toward the sounds. Those were not the whiny, frustrated shouting of boys in conflict. She heard fear and pain. She dropped the bucket, spilling what little milk remained. “Mommy, David’s stepped on a nail.” The cries came from behind the barn—the old lumber pile. Deborah climbed over the fence and ran through the corral, holding her breath as she dodged clouds of hovering gnats. Marco barked with alarm, following close to her heels. The pile of old lumber was big, some of the boards in decent condition, others full of wood rot. Jonathan teetered at the very top of the pile, and David stood midway up the side. The boards were piled every which way. Both boys were barefoot, rocking on the unsteadiness; all around them were occasional, protruding nails, some glinting in the sunlight, others rusty. “He’s nailed, Mommy. David’s nailed.” David’s face was tear streaked, and little sobs of fear made him hiccup. He stood on a small board, his arms thrust out from his sides, balancing on the pile. She could see blood on the board. “Aw, David, I’m so sorry.” Maybe blood poisoning ... the thought chilled her backbone. “He’s nailed,” Jonathan said again, his voice shrill. “It’s just like he hammered that ol’ nail in his foot.” He teetered. “Jonathan, stand as still as you can,” Deborah said. “I’ll get him down, then I’ll help you.” She bent down by David’s foot, and he grabbed her shirtsleeve. “Don’t touch it, Mommy,” he whimpered. “Oh, but David, we have to get you off the nail.” With a sudden move, she pulled his foot upward, and he gasped, choking on his own quick intake of breath and saliva. He leaned over her shoulder, sighing with relief, and she gathered him up, pressing her head against his. She carried him down the pile’s side, feeling the instability of the haphazardly stacked boards. Trying to avoid the nails in one old board, she slid to the ground, landing on her haunches but holding the boy tightly. She grasped the foot and pressed the heel, forcing blood from the wound. “Don’t,” David howled. Marco licked his face. “Yes,” she said firmly, and he cried louder. “You just as well stop it. I’ve got to do this.” She told him how the blood would clean the dirt out of the wound, but she didn’t mention the frightening possibility of blood poisoning. David quieted down and nodded, “Okay.” She wiped his runny nose on her shirttail and covered his face with kisses. When the puncture ceased to bleed, Deborah tied her handkerchief around his foot and left him seated on the ground. She climbed the woodpile again, wrinkling her nose at the odor of something dead, probably a missing cat. At one point, two boards slid from beneath her, and she held her breath, watching them come to a rest near David. When she reached Jonathan, he grabbed her about the waist, and more boards slithered down the pile.

It is 1931 in Fremont County, Kansas, and Deborah Nelson’s husband, Christian, disappeared months ago. But Deborah has no time to feel sorry for herself. Two children need her love, livestock require feeding, and farm crops must be tilled. Deborah is desperately trying to survive in a man’s world—an especially challenging task for a woman believed to be an Indian.

Even after a drought begins to cause dire conditions, Deborah refuses to leave, for her soul is still connected with the land. She decides she must sell her cattle and stop planting wheat and then finds herself fighting a field fire that comes close to burning her farmstead and threatens the life of her old friend. Things go from bad to worse when she, her children, and the community experience the first horrifying dirt storm of the drought. Deborah partners with her closest neighbors to share labor and valuable resources, not realizing that very soon, one neighbor will leave her with five more mouths to feed and a promise he may not be able to keep.

The Marrow of Life continues the saga of one woman’s determined journey through the hardships of the Depression and Dust Bowl era as she slowly comes to the realization that she must turn to others for help.

Nancy Larsen-Sanders was once a college teacher of composition and literature, creative writing, and English as a second language. Later, the majority of her teaching career was spent in northwest Kansas in the Colby schools, teaching secondary learning disabled students. This is the third book in her Earth’s Memories series. Nancy and her husband, John, live near Colby.