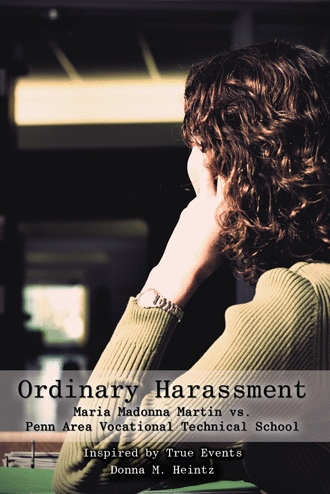 Maria Martin is a small woman with a big heart and a strong mind who always looks for the good in people. A teacher who loves to share her passion for learning with her high school students, Maria never imagines that one day she will become a victim of a phenomenon more common than she ever realizes.

In 2000 after Maria accepts a teaching job at the Penn Area Vocational Technical School, she begins keeping a diary as a way to record events she hopes will help her become a better teacher, role model, and person. Maria’s love for her daughter, Alonna, and her rewarding job bring her a good life—until she begins to receive flowers on a regular basis from a married male coworker she barely knows. Alan Pierce has set his sights on Maria, an unwilling participant in his well-known sexual escapades. As his advances escalate, Maria soon finds herself in the midst of a nightmare infused with verbal intimidations, vandalism, and a physical assault.

In this compelling story based on true events, one woman must rely on her inner strength to rise up above the heartless, malicious behavior of her tormentors and seek justice for all.

Donna M. Heintz is a dedicated mother and honored teacher. Her honors include Fayette County Chamber of Commerce 2012 High School Educator of the Year and Westmoreland/Fayette County Learning For Life Above And Beyond Honoree She became the victim of workplace sexual harassment, bullying and physical assault. She refused to leave the job she loved and the students who captured her heart. Donna continues to teach in Pennsylvania.