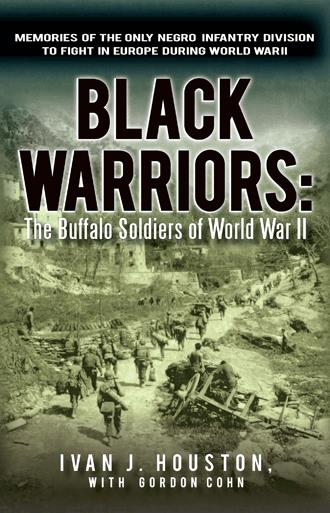 Numbering 4,000 select officers and men, Combat Team 370 was part of n Europe during World War II the 92nd Infantry Division, the only all-Negro division to fight in Europe during World War II. In Black Warriors: The Buffalo Soldiers of World War II, author Ivan J. Houston recounts his experiences, when, as a nineteen-year-old California college student, he entered the US Army and served with the 3rd Battalion, 370th Infantry Regiment, 92nd Division of the US Fifth Army from 1943 to 1945.

Drawn from minute-by-minute records of the unit’s activities compiled by Houston during his deployment in Italy, this account describes both the historic encounters and the achievements of his fellow black soldiers during this breakthrough period in American military history. It tells of how the Buffalo Soldiers fought alongside other American troops, including Japanese Americans and soldiers from Great Britain, Brazil, South Africa, and India.

With photos and maps included, Black Warriors: The Buffalo Soldiers of World War II provides a compelling, firsthand account of the segregated Buffalo Soldiers’ experiences while they fought not only the power of the Nazi war machine but also racism and the widely held belief they were not up to the task. Their achievements prove otherwise.

IVAN J. HOUSTON, a graduate of UC Berkeley, is the retired CEO of one of America’s largest black businesses. He was also the first black director of some of the nation’s largest corporations. He served in the US Army from 1943 to 1945. Houston lives in Los Angeles, California.