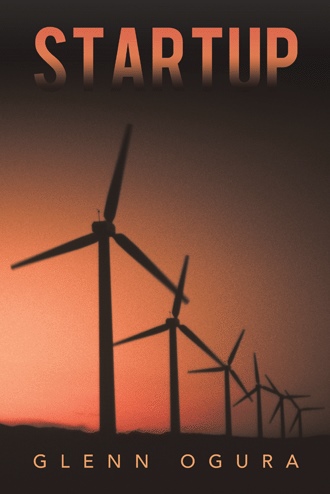 The magnificent towering structure of mirrored glass and steel could easily have been the entrance to the glass manufacturers shrine but it really was nothing in comparison to the black marble floor. That is, if one’s eyes didn’t become lost in the many mirrored and polished surfaces that surrounded them like the finest fun-house entertainment that money could buy. Most people didn’t even notice the floor, their eyes being automatically drawn to the steel mobile that hung precariously thirty feet overhead. It revolved ever so lazily, its burnished steel dazzling in the California sun. The ultra-thin suspension cables were concealed by the mosaic pattern on the wall behind the display, creating the momentary illusion that the massive structure was simply hovering, perhaps by some trick of magnetism.

To Zack the mobile overhead looked like scimitars and guillotine blades and the mirrored surfaces merely homage to vanity. It was the floor that was the truly magnificent work of art in the entranceway. It was wall to wall of highly reflective black marble; its surface polished like it had been overlaid in glass. He’d often wanted to kneel down to take a closer look at the fine veins of the marble and touch its smoothness. Walking across it was like stepping into space: looking down at the pinpoints and streaks of white, one strolled through the stars of the heaven, passing by galaxies, and the streamers of some gaseous nebula. The steel and glass were impressive but beneath it all was the constancy of the universe; immoveable, immutable, and terrible in its beauty.

It was an illusion that only lasted six paces. After that, you stepped onto the plush burgundy carpet that surrounded the receptionist’s area, which stood like an island in the vast lobby.

This was not what Zack imagined his future company would look like. He wanted something far less ostentatious. Although he wondered what DisplayTechnik would take if he offered to buy the floor; he’d happily pry it up himself and replace it with more of that burgundy carpeting.

Zack was not actually supposed to be passing through the main lobby and he didn’t most days. He was supposed to use the employees’ entrance around back but he came through here whenever he needed a shot of inspiration. Besides, it was only 6:30 and any of the flock of senior vice-presidents that might care if he was violating company protocol weren’t likely to be here. Like most of the other engineers, he usually got to work early, though not merely to avoid the crawl over Highway 680. He liked to take in the surroundings, soak them up, and breathe in the crisp mechanically filtered air, knowing that one day his company would never ever look like this.

But he did hope to have someone as cheerful as Jan as his receptionist, who saw him standing there, flashed him her beaming smile, and waved him over.

“Yes, okay. Hold please—” and she put the caller on hold before they could object. “Hiya, Zack, how was your weekend? You look tired, didn’t you get in any sleep?”

Zack smiled. “Of course. Whenever I wasn’t working or awake.”

“You know, weekends mean taking time off, not just not going to the office.”

“I know but the work doesn’t get done if someone doesn’t do it. I am planning on going skiing…” his voice trailed off when Jan disappeared completely behind the desk and he leaned over to see if she’d fallen through some sort of trapdoor, “…next weekend.”

Jan popped up with a rectangular block of tinfoil. “Here. It’s a banana nut bread I made. It was supposed to be for Jimmy but you’re looking thinner and thinner lately. Haven’t you been eating?”

Zack knew better than to argue or refuse the gift. He was about to defend his appetite when Jan turned back to the flashing lights on her board. “DisplayTechnik, how may I direct your call? Oh! Have you been holding all this time?”

Zack mouthed a thank you, and slid the package off the counter. It was heavier than it looked. Jan gave him a wink and wave and he walked toward the bank of glass elevators. He walked past them (they went to the corporate offices) and swiped his access card to the door to the stairs. Walking up to the third floor, he sampled Jan’s bread. He hadn’t had breakfast, unless two cups of coffee with cream and sugar counted. It was worlds above the preservative-loaded cinnamon roll from the vending machine that he usually had around nine after he’d answered the wave of e-mails that had come in after he’d left the office the Friday evening.

At the top of the stairs he swiped his card again and walked down the empty hallway to his office. He fumbled in his pocket for the key and then set down his briefcase when he couldn’t extract it while juggling everything else. The heavy briefcase tilted against the door and it swung slowly open.

If it had made a long and slow creaking noise, it would have been a great scene for a ghost story. Zack just stared at the door and then nudged it open with his knee. He was positive he’d locked it. He always locked it before leaving on Fridays.

Zack walked inside and let his fingers walk up the wall until they found the light switch. The overhead fluorescent light stuttered, then finally flickered to life, revealing an office lined up with rows of big green binders on the carpet by the window.

His eyes flashed automatically to his desk and noted that everything looked just the way he remembered it, though perhaps somewhat more organized than he usually left it and it seemed slightly skewed to one side. Even the imitation pine bookcase was pushed at an odd angle away from the wall.

Zack felt a wave of nervousness. He glanced at the filing cabinet, which still had the button in the locked position. He’d been a bit suspicious that someone had been going through his things lately and it bothered him, even if he knew they wouldn’t find anything here.

Well, maybe it was the damn careless cleaning staff again. It would have been the second time in three weeks that they’d failed to lock his door. They had, after all, just hired some new staff. And it wouldn’t be the first time that they’d gone nuts with their massive industrial vacuums.

He tossed his keys onto the desk, set down his empty coffee mug, and then set his briefcase on the chair and opened the locks, taking one more look around him. Everything seemed secure and he was relatively certain it was the cleaning staff. Even so, he just didn’t like the idea of someone snooping through his things even if there was nothing for them to find.

Wait a minute. Did he leave the drawing here that Dimitre had scratched out at lunch on Friday, the one with the latest specs? Panic started in his stomach like he’d reached the crest of a roller coaster’s first hill and he was about to go over.

Okay, it had been here on his desk. Jesus, if someone found that—holy crap.

No, wait a second. He remembered sticking it in his briefcase. He was going to work on it over the weekend but never got to it with everything else he’d had to do. But he couldn’t remember seeing it since then.

Zack lifted the unlocked briefcase and turned to place it onto his desk, and spilled the contents in an arc around the room.

Oh well, he’d wanted to go through it all anyway. He got down and started rummaging, piling it all back in the case as he went. Overdue laundry (second notice), magazines, the latest crap from marketing about how they desperately needed specs and colors, and CDs. He scooped together the half dozen reports he was supposed to have finished up on Saturday that still weren’t finished and flipped through them thinking the napkin might have gotten mixed up with them. Boy, wouldn’t that have been sweet.

Young idealist Zack Penny usually gets to work early to take in the surroundings and breathe in the crisp, mechanically filtered air, knowing that one day his own company will be very different from Display Technik. As he follows the vision of his highly successful, results-at-all-costs mentor and CEO Allen Henley,  Zack quietly nurtures a big dream—to create a new company of high morals and values, one that will revolutionize the world through the creation of wallpaper-thin displays to completely surround a viewer.

That dream is set into motion one morning when he realizes an important paper has been taken from his office. Moments later, Zack learns someone has turned him in. After his boss, who also happens to be the father of his girlfriend, Mary Anne, gives him one last chance to pledge his loyalty, Zack resigns. Determined to realize his vision, he soon steps into his new facility with high hopes and no idea that Henley has already put a plan into action with the intent of systematically destroying Zack, his perfect company, and, most of all, the relationship between Zack and Mary Anne, who is unwittingly caught in the cross-fire.

In this fast-paced thriller, a young entrepreneur faces moral dilemmas in Silicon Valley, a place where the inner working of the legal system favors the aggressor.

Glenn Ogura is the executive vice president for a New Hampshire-based laser micromachining company. He is a graduate of Electrical Engineering from Queen’s University in Canada. He lives with his wife in California. This is his first novel.