Path to a Better World

A Plan for Prosperity, Opportunity, and Economic Justice 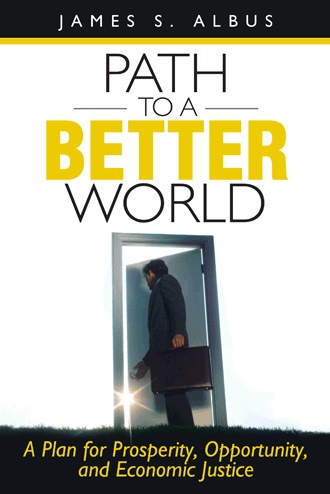 The technology of the industrial revolution, combined with the emergence of capitalism, has produced a dramatic increase in the rate of economic growth, and led to a degree of prosperity that had never before been experienced during the entire history of the human species. Machines have largely replaced muscle power in agriculture, manufacturing, construction, mining, and transportation. An exponential increase in scientific and technological knowledge has resulted in productivity improvements that have enabled the production of goods and services at a rate far in excess of any historical precedent. During the first industrial revolution, the need for human workers to control the machinery of production and manage the process of commerce enabled workers to demand fair compensation for their labor, and led to the emergence of a prosperous middle class. However, application of computers to the control of industrial processes and business management is bringing into being a new generation of machines; machines that can not only create wealth unassisted by human beings, but can even repro¬duce themselves at continuously decreasing costs. The potential long-run effects of this event are profound. There is good reason to believe that the computer revolution will change the history of the world even more profoundly than the industrial revolution. The growing technical feasibility of factories and businesses that can operate largely unattended by human workers, and reproduce their own essential components, implies that manu¬factured goods may eventually become as inexpensive and un¬limited by process complexity as the products of biological mechanisms in living organisms. Unfortunately, there presently exists no means by which average people can fully benefit from the unprecedented productive potential of truly intelligent machines. Quite to the contrary. Under the present economic system, the widespread deployment of automated production systems will threaten jobs and undermine the financial se¬curity of virtually every American family. There are two possible futures: One is to continue the current economic system wherein a small group of capitalists own most of the capital assets and businesses increase their profitability by getting rid of workers. In this future, the gap between the rich and poor will grow, high unemployment will become the norm, wages will decline, and the number people living in poverty will grow. Economic growth will be slow because consumer demand will be weak. A second possibility is to adopt a new economic paradigm that takes advantage of the potential of technology developments, and broadens the ownership of capital stock so that everyone can benefit from increasing productivity and profitability generated by advanced automation. This second possibility could enable the elimination of poverty and the creation of an era of prosperity and financial security for all human kind. It could generate rapid economic growth that would solve most of the problems of unemployment and rising debt that currently plague the economies of Europe, Japan, and the United States. It could reverse the decline of the middle class, and provide financial security based on ownership of capital assets to every individual. The great challenge of the 21st century will be the development of an economic system wherein pros¬perity can be achieved and personal freedom can be preserved in a world where most wealth is created by intelligent machines. This book outlines a political and economic program to anticipate the scope of the coming technological revolution and to harness its enormous productive power for the benefit of all human kind. It provides a message of hope, a plan of escape from the present worldwide economic dilemma of poverty and slow growth, and a program for a new economic order in which poverty will no longer exist, material prosperity will be commonplace, and the full potential of human knowledge will be directed toward the fulfillment of mankind’s most majestic imaginations. The proposed economic system might best be described as a blueprint for Jeffersonian Democracy in a modern technologi¬cal society.

Is it really possible to live in a world without deprivation or economic strife, but instead with peace, prosperity, and better opportunities? Path to a Better World proposes a practical plan that provides the means to make this dream a reality—and all before the end of the twenty-first century.

James Albus, an engineer, neuroscientist, and international expert in robotics and intelligent systems, begins by sharing his vision of an ideal world and contrasts that with the current reality. After discussing the strengths and weaknesses of the cur-rent free market capitalist system, Albus suggests an improved version of capitalization that has the potential to broaden the ownership of capital and stimulate significant economic growth. Included is a review of our nation’s technical progress to date and a proposal that encourages future technological advances that possess the capabilities to propel the country into an unprecedented era of success.

Path to a Better World is a well-researched, informative guidebook that allows Americans to imagine a life under a new form of capitalism that has the potential to offer the people of this great nation domestic tranquility, economic justice, and the pursuit of happiness for not only ourselves, but also our posterity.

DR. JAMES ALBUS is an international expert in robotics and intelligent systems. He founded and led the Intelligent Systems Division at the National Institute of Standards and Technology for thirty years. He is currently a Senior Fellow at the Krasnow Institute for Advanced Studies at George Mason University. This is his fifth book.