In Our Duffel Bags 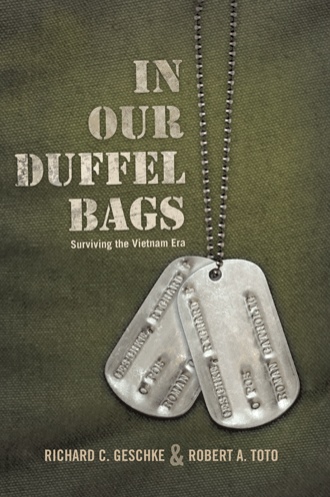 In the first two weeks, we had sapper attacks and distant incoming rocket fire. When this happened, the siren would go off and we would scramble to the nearest sandbagged bunker. These were ugly dugouts in the Earth with no lights other than an occasional flashlight. Sitting in these rooms with our helmets and flak jackets was not my idea of a Southeast Asian vacation. So you get the picture of our rather mundane yet somewhat disturbing routine. After a while as one settles into this routine and it can affect one’s nerves and fatigue begins to set in. In early January of 1972, I was on that downward slope for wearing down and on this particular night I turned in at around 23:00 hours and as usual I slept through the night and woke up at 05:00. I proceeded to the latrine where I showered and later dressed and walked through the morning darkness and mist to the mess hall. As I took my tray to my usual customary table, I was greeted by two of my Officer peers who I’ll call Jerry and Kramer. Jerry immediately questioned me rather abruptly “Where the hell were you during the rocket attack?” Kramer butts in and says “Didn’t you see the damage along the Base perimeter?” I looked at both of them as if they had three heads and rather sheepishly said “How many rockets?” Kramer mumbled “41 or 42 I guess, I seemed to have lost count.” “Oh” I said, “I didn’t hear anything.” Jerry screams “You didn’t hear, 7 or 8 people were killed and we have all that damage outside!” With a loss for words I merely said “Well Jerry, it’s dark outside and besides I was dead tired, I didn’t hear a thing!” I missed all the excitement. All I can say to this remarkable incident is that it happened and I have no recollection of it. Where was I during this attack? I slept through the excitement. Some war, some excitement!

They were young, and they were fighting a war no one wanted to fight. They chose to serve their country despite these challenges. In In Our Duffel Bags , authors Richard Geschke and Robert A. Toto narrate the stories and the experiences of what junior army officers faced as citizen soldiers during pre-voluntary military service from 1969 to 1972. This memoir provides an inside view of the military on the training fields of the Cold War in West Germany and on the combat fields of Vietnam. It presents a poignant and detailed drawing of what junior officers contended with during these turbulent times in American history. From the training grounds in Fort Benning, Georgia; to the jungle warfare school in Panama; to the streets of West Germany; and to the rice paddies of Vietnam, In Our Duffel Bags intimately describes the sights, sounds, and smells of life in the military Much more than a historical account, In Our Duffel Bags interweaves Geschke’s and Toto’s individual experiences and perspectives, ties them back to their families, and sets it all within the volatile historical and political setting of the 1960s and 1970s. It shows how these times affected history as well as impact current politics.