From Boulders to Pea Gravel 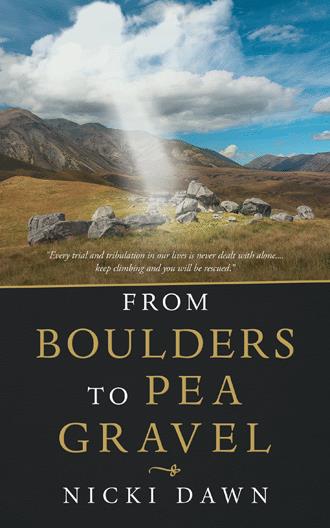 It seemed like everything that I had fought so hard to achieve had just been washed away once again. My first born, the daughter that I had always been so proud of, was choosing her friends over her mother. She was choosing to be with “Disney” parents who would play like they were teenagers themselves and spend Tanya’s mother’s money on vacations that they could not afford on their own. She admittedly, was choosing to be where the grass (or money) looked greener on the other side. Honestly, I’m not sure what teenager wouldn’t prefer that kind of life. Instead of a life filled with integrity, and lessons on how to scrimp and save, and family, and church, she wanted something happier. She wanted fun and friends and money to do it all as she pleased. She wanted what I could no longer offer her now that I was divorced. I did not blame her for it. I was angry and I was hurt. But I didn’t blame her. Leviticus 19:17-18 tells us, “Don’t hold grudges. On the other hand, it’s wrong not to correct someone who needs correcting. Stop being angry and don’t try to take revenge.” Then in Proverbs 22:6 and 22:15 we are told, “Teach your children right from wrong, and when they are grown they will still do right….All children are foolish, but firm correction will make them change.” I let Didi know how I felt about the situation. She knew in her heart that it was wrong. But still, she was being led by Satan’s temptations.

This book is nothing short of an inspirational read. A young mother of three struggles with her failing health, loss of her job, a move, loss of a child and more all within less than a year’s time! But through her faith, she is able to hold her head high and keep climbing every mountain in her way. God’s presence and His word are pointed out throughout each trial inspiring you too be drawn to Him with her. The scriptures quoted to you will allow you to both see and feel His work not only in her life, but also in yours!

I am a follower of Christ who is inspired to share God’s word with other people. It is my hope that through my book even one other life may be touched with knowing His presence. I am motivated in life to overcome every trial through faith and to share that faith with others. I have seen God’s work present before me during the times when I was most afraid. I have seen my prayers answered, and I have seen Him give me several unanswered and unasked prayers as well. I have learned that it is okay to have him be my everything selfish. I am a big city girl now living in a rural small town, and I could not be happier. I have been blessed in so many ways with the people in my lives. My children are excited to grow up with their peers attending church activities and participating in events as a community. I could not be more blessed with the opportunities that have been layed in my path to serve my children, my work, my community, and my church.