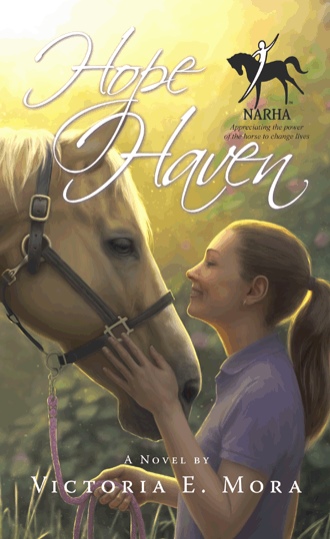 Over a decade ago, I met a young man at a NASCAR race in Virginia. Our conversation turned from race cars to horses. At the time, I owned and showed two hunters. I was surprised to learn that this young man rode horses too—surprised because he was using a walker. He explained that he had spent his youth in a wheelchair, but through therapeutic riding had learned how to walk. I owe a debt of gratitude to this young man for his hope and inspiration.

To Merlin Simek and the entire team of nurses, aides, and volunteers from Hospice of South Louisiana, thank you; I never imagined I would learn so much about living while taking care of the dying.

For sharing the joys of volunteerism and showing me first-hand the miracles of therapeutic riding, I want to thank Rebecca McClung and acknowledge the therapeutic riding program at Chastain Horse Park in Atlanta.

Thank you to Pastors Duane and Rachel Bland for always giving a word in due season, and to Celeste and Bill Johansen and all my friends at TFC; I appreciate your friendship and endless support.

Finally, thank you to my brother Rick, a patient listener and gentle advisor. To my entire family: your love and encouragement are the foundation for every wonderful thing in my life. God bless you all.

Pressing my face into the cold glass, I gaze out the window of our sterile house. I fix my eyes on the aging willow and wait, half-heartedly, for the tree to transform into a handsome prince like it did when I was a kid. Back then, my fantasy prince would dismount a golden horse and twirl me around and around until the orange sun faded below the horizon.

Mom’s voice drones from somewhere behind me. “Lou, didn’t you hear me? I’ve been calling you for ten minutes! It’s time for Grandma’s bath.” Mom’s slippers brush back and forth across the hardwood floor. She’s pacing again.

“This summer is shaping up to be a first-rate disaster,” I grumble.

Ignoring Mom, I strain my eyes, hoping for a glimmer of movement, of transformation, but the shining sun mocks me, as it has since summer started. I squint against the light and try one last prayer: God, if you’re listening, please make things the way they used to be. But there is no answer. There is no prince either, only a wasting willow with droopy branches, and the black hole in its trunk remains faceless.

Mom’s insistence drags me into the present. I peel my face from the glass and abandon my fantasy, leaving it to wither in the sun.

“Fine,” she whimpers, “leave me to take care of everything.” It was a direct hit. For a moment, Mom winces in the doorway like a wounded dog, and then she bristles. “You’re sixteen years old, Lou. That’s old enough to help out around here.”

She’s still beautiful, even behind limp hair and with a pale complexion. On her better days, we’ve been mistaken for sisters, but in a home where death lives, a shower and makeup are luxuries. I almost feel sorry for what I’ve said, but Mom rolls her eyes and turns away, and I’m effectively dismissed.

The gray door into death’s chambers looms at the end of a long, shadowy hall. I can hear Grandma behind it as I pause to rebalance the towels. Her soft moans give our summer meaning, like going to the beach for vacation. After a couple of weeks, the enchantment of waves slapping the shore or the smell of salt in the air fades. But if I stand still long enough, their inescapable force intoxicates me all over again.

“Lou,” Mom whines from Grandma’s bedside. “Don’t just stand there!” I creep past the door and stretch the tower of towels toward her.

Of course, taking care of Grandma hardly qualifies as a vacation. The only smells in our house are rubbing alcohol from Grandma’s bath and pine disinfectant—a poor covering for Grandma’s illusive bowel movements. Both fragrances linger on Mom like bad perfume.

It is the smell of death—a stench that can’t be washed off with soap and water.

Mom tells time by Grandma’s schedule. If she isn’t feeding Grandma or bathing Grandma, she’s changing her or giving her medication. Grandma’s dying sucks the life out of Mom.

“Here.” I drop the fuzzy towels into Mom’s lap, but some tumble to the floor. I hurry toward the door before she can assign more chores.

“Don’t worry about picking that up. I’ll get it,” she says. I can tell she’s rolling her eyes without even looking back.

I pause in the doorway and glance over my shoulder. Mom’s already elbow-deep in sudsy water. “I’m going straight to Dad’s house after the barn.” She nods but doesn’t say a word, and I have no idea what she’s thinking.

I grab a couple of green apples off the kitchen table, hop on my silver bike, and pedal toward the only place where I can escape—Hilltop Hunters. It’s been three years since the first time I raced out of the house to see my horse Dawn Treader. My entire life has turned upside down since then.

I finally had the horse of my dreams, but then everything else started falling apart. First of all, my parents got separated. They promised to at least try working things out. That was about the same time Grandma got sick. In the beginning, Mom stayed busy with Grandma’s cancer treatments, so I could understand why there wasn’t much progress in the marriage-mending department. But when the doctor announced the treatments weren’t working, Grandma moved in. Dad was officially on the back burner. Now, even with the constant flow of hospice visitors, our home feels empty. It’s definitely quieter, and since Dad’s been gone, there hasn’t been any laughter.

“Lau-ren,” Chad the barn manager shouts and waves his arms frantically in my direction. I drop my bike into the square-shaped hedge and yank my favorite pink hat down low. But when I see Dad round the corner, a soda in one hand and a wide grin fixed on his face, I gallop like a wild horse across the manicured grass.

“Hey, Pony-Girl,” he hollers. When Dad smiles at me, I feel like the center of his universe. “How are Mom and Grandma?” he asks, wrapping an arm around my shoulder.

“The same,” I say, inching closer to him.

Chad throws his shoulders back, removes the cowboy hat, and rakes his manicured fingers through perfect hair. “Lauren Hart,” he says, exaggerating my name, “what did I tell you last week about throwing your bike around?” He sticks his nose in the air and adds, “I know we’re all supposed to be having oodles of fun, but someone might catch their foot on that bike of yours and get seriously injured.”

I roll my eyes under the brim of my hat, and Dad squeezes my shoulder. “Hurry up before you get us in more trouble,” he whispers. I can’t help giggling even though I know it will irritate Chad.

“Wait one minute!” Chad shouts before we’re even ten feet away.

“I told you so.” Dad chuckles and pinches my arm.

“We need to discuss that horse of yours.” Chad folds his arms across his chest.

“What do you mean?” I glance sideways at Dad, hoping he can help me out of whatever jam Dawn has gotten us into this time.

“Dawn jumped out of the paddock again yesterday,” Chad says. “I’ve already moved her into the fi eld with the highest fence.”

Sixteen-year-old Lauren Hart’s summer is shaping up to be a first-rate disaster. Even after she asks God to make things the way they used to be, Lauren’s reality is still as harsh as ever. Her parents are separated, and now she has to help care for her terminally ill grandma. Just as Lauren wonders what else could go wrong, it does.

Lauren and her horse, Dawn Treader, are ranked number one in the Junior Hunter Division and are headed to the national finals—that is until Dawn leaps out of the paddock and is seriously injured. Worse yet, her grandmother—who has always been a rock in Lauren’s life—is knocking death’s door, leaving Lauren to wonder what is next. But after Lauren meets the staff at Hope Haven Therapeutic Riding Center, everything is about to change—not only for her, but for her beloved horse as well.

In this heartwarming, coming-of-age story, a teenager rediscovers her faith and hope through tender friendship and the healing power of horses.

PATH International, formerly NARHA, is a federally-registered 501(c3) nonprofit and was formed in 1969 as the North American Riding for the Handicapped Association to promote equine-assisted activities and therapies for individuals with special needs. More than 6,500 PATH Intl. members help more than 42,000 children and adults with physical, mental and emotional challenges find strength and independence through the power of the horse each year. With every purchase of Hope Haven, you will be helping PATH Intl. continue to advocate for safe equine-assisted activities and therapies for people with special needs.

Victoria E. Mora grew up in New Orleans and spent her youth competing with her horses on the A-Circuit. She earned her bachelor’s degree from Scripps Women’s College in Claremont, California. After returning to Louisiana, Victoria worked with Hospice of South Louisiana, leading the volunteer team. She currently resides in Louisiana.