Greece at War and a Family’s Dreams of America 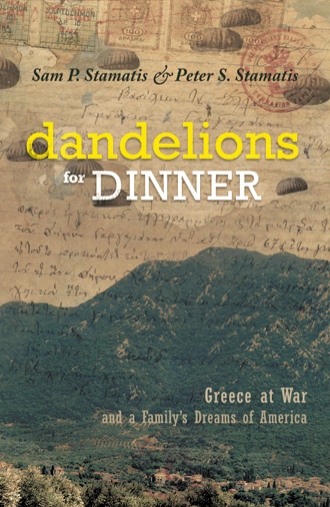 Dandelions for Dinner Chapter 1 Death Is in the Air The battle had begun quicker than I expected, and the chaos was a surprise. We knew our lives might be at an end as soon as haphazard cannon shots fired by members of the Andartes—Greek Communist guerilla fighters—began to rain down near our home in the early morning’s darkness on September 22, 1944. Though I was only eleven years old, I was well aware that others, certainly many more worthy, wealthy, and able than us, had not made it. I also knew that whether we would survive this dark day was no sure thing. In fact, the odds were heavily against us. When a shell, luckily a dud, crashed through our neighbors’ home and slammed into its kitchen, Mother grabbed my younger brother Stathi. “We are leaving,” Father said and directed the four of us through a maze of narrow streets to my uncle’s home several blocks away. There, along with a number of other traumatized, war-weary people, we huddled in a storage room, temporarily safe from the random and sloppily aimed explosions. From that bunker, we trusted that our side—the Royalists and their “Protective Forces”—was winning, that the invaders would not take our town, and that we would be able to continue our lives in the same rhythms that we had always lived them. But these notions were promptly dashed when we saw a soldier, one of ours and dressed in his street clothes, walking away from the fight. Father asked him how we were doing and if Gargaliani had been able to defend itself against the Communist attack. The man scoffed at us and declared that the battle had ended and the invaders had prevailed. Before long, we began to see more and more of our fighters abandon Gargaliani’s defense—an even more troubling, foreboding sight. In minutes, bearded Communists filled our street. The conquerors ordered us, along with everyone else, to move through the town, and they herded us past its plateia, the main square and center of community life; Father and I moved together while Mother kept a grip on Stathi, who was only five years old. We were funneled into Gargaliani’s high school, where the victors undertook to sift their supporters from the crowds. The Communists spoke of reconciliation, but it quickly became clear they were in no forgiving mood at all. We watched for hours as they separated their sheep from the goats, and they mercilessly eliminated problem people who failed their makeshift loyalty tests. It was only through a gift of fate that we were passed when, as supporters of the Royalists, we should have been failed. They set us free onto the streets. Unsure what to do, we stood before the house of the leader of the Protective Forces. If to the victor belong the spoils; to the vanquished belongs woe—the heroic warrior was on the run, his residence in flames. Communist guerilla fighters moved quickly through the streets and crisscrossed the plateia. Whatever rules had previously governed our civilized town had disintegrated. We were on our own, and there was no one to turn to—anarchy had triumphed. For us to survive, Father knew we had to get off the streets and to the safety of our home. But that wouldn’t be easy. Before us, we could see that Andartes intoxicated by bloodlust filled the plateia. They moved everywhere throughout the square as each of their unmerciful deeds fueled other, more incomprehensible and unconscionable ones. Father led us quickly and quietly through the streets of our town as the bone-jolting cracks of all-too-close firearms serenaded us. The streets were littered with the discarded dead, our neighbors frozen in random poses of horror. When we were only twenty or so meters from our home, we recoiled at the sudden appearance, directly in front of us, of a teenager we knew named Takis. Two barely pubescent Andartes, armed with pistols and holding rifles, stood beside him. Mother never cared much for Takis or his family. Over the years, our relationship with him had been perfunctory and inconsequential; he wasn’t part of our world, and we weren’t part of his. Prior to that moment, Takis’s existence had never mattered to us one way or another. But when Takis saw Father, the young man’s eyes darted back and forth and, as if he had finally located his prey, he pointed at Father. “There’s one. There’s one right there. He is one of them.” Father froze. “Shoot him; shoot him now,” Takis ordered. The obedient Andartes raised their rifles and took aim at Father. * * * Who could have imagined we would have arrived at this brink, to such an unceremonious end to year after year of struggle and suffering? How was it that we, Greeks who had spent the previous decade surviving famine, war, and foreign occupation, suddenly stood face to face with our executioners, other Greeks no less, people who like us had struggled through those same years of suffering? To understand how my family, not to mention Greece itself, had descended to this mindless place, we must start at the beginning.

What happens to a family already on the brink of disaster when the world around them crumbles?

Dandelions for Dinner presents a memoir set in the sleepy town of Gargaliani, Greece, spanning the last quarter of the nineteenth century through the Greek Civil War of the 1940s. Told through the eyes of a thirteen-year-old boy, it is an epic tale of youth, family, poverty, war, and unjust loss. It is also an uplifting story of how in the midst of calamity, survival is possible by using your head, taking your hits, and maintaining an undying faith.

Though it is the tale of a family that is by all standards poor, Dandelions for Dinner demonstrates just how rich the poor can be when they have hope, faith, and love for one another—when they maintain the lessons of their parents and forefathers, nurture a love of education, and never let up on their hope for freedom. This memoir is, above all, a story about the importance of America—not only for those who live there, but also for all those who reside in the dark corners of faraway lands and dream of a better life.

Over the course of their life together, any family will most assuredly experience both want and plenty, suffering and joy. Dandelions for Dinner is the surprising story of what remains when everything else is lost.

Sam Stamatis was born in Gargaliani, Greece. He immigrated to the United States at age thirteen and later served in the US Army. He lives in Chicago’s northern suburbs with Litsa, his wife of some fifty years.

Peter Stamatis is the youngest of Sam’s three children. He currently runs his own law firm and lives in the northern suburbs of Chicago with his wife, Kathi, and their children.