Teachers Beyond the Law

How Teachers Changed Their World 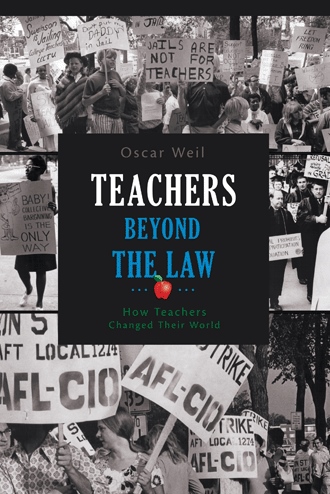 Chapter 1
The Long Beginning
I waited in the Cook County, Illinois, courtroom with Norman Swenson, President of the Cook County College Teachers Union, Local 1600, and other leaders of the union for the proceedings to begin.  Swenson was in danger because he had violated a judge’s injunction during a strike four years earlier, an action for which he had received a thirty day jail sentence, punishment he was still appealing.  He could be a two-time loser this time.
What would the judge do?  He had already issued one injunction against the current strike and ordered negotiations between the Union and the Chicago City College Board, negotiations that went nowhere.
During the eight years since I had left my classroom to organize teachers’ unions, I had been in many courtrooms with teachers who struck only to be ordered back to work, or, in some cases, ordered to appear in court to show why they should not be punished for refusing to obey court orders.  Usually, we had found ways to work around such orders, sometimes by appealing to political friends I met while lobbying in Springfield.  At Swenson’s request, I had also worked with his union numerous times before.
Members of Local 1600 packed the courtroom, also waiting to see what the judge would do.  They were angry and frustrated by the lack of progress, though they observed the court’s decorum.  I knew they would surely renew their strike unless there was some kind of positive development.  Then the judge would have to enforce his injunction.  There could be jail sentences and other punishments, just as there had been in other teachers’ strikes.
I looked across the aisle at Ed Lev, the College Board’s chief negotiator, who had been hired to weaken teachers’ working conditions and benefits under the union’s contract.  Lev and Oscar Shabat, chancellor of the City College, sat together and whispered to each other from time to time.   They had initiated the court proceedings by petitioning for an injunction against the strike and were thereby responsible for the court proceedings.  The two of them had a smug and confident look.  For months, Lev had been unbending in negotiations, with apparent intent to force a strike and the inevitable court action.  He was a lawyer who had come from Massachusetts, a small man with a cocky, arrogant manner.  We often referred to people like him as legal goons.
Shabat was a man of medium height and build who liked to talk and control the conversation.   He irritated Swenson, but I told him, “Let Shabat talk. He’ll hang himself sooner or later because he thinks he’s smarter than anyone else.” Lev and Shabat expected the court to order the teachers back to work; then we would be at their mercy. Shortly, the court was called to order and Judge Nathan Cohen spoke:  “I have ordered the parties to court today to begin bargaining directly under my supervision.  I intend to see that the strike is settled with good faith proposals from both sides.  When settlement has been reached, I will issue an order setting forth the terms of an agreement.  I will use my authority to see that terms are enforced.”
I was startled.  “My God, he is speaking to the board and union as equals.” Again I looked at Lev and Shabat.  The full effect of what the judge had said did not seem to register because their expressions appeared blank.  “Without the court to protect them from having to bargain,” I thought, “they will not know what to do.”
As events were to prove Judge Cohen meant what he said, and his actions were greatly encouraging to Local 1600 and other teachers’ unions in the state.  This incident took place in the winter of 1971, after years of struggle and frustration for teachers’ leaders who sought to win equal rights under the law.  More years would pass, and some teacher leaders, including Swenson, would again be threatened and even jailed in attempts to intimidate them, but never again would court injunctions be as effective in driving teachers back to work without consideration of their rights as citizens.  In that sense, the incident marked important progress in the long battle for teachers’ rights.
Then, in the fall of 1971, Dan Walker began a successful campaign for governor in which he proclaimed he believed teachers and other public employees should have the right to strike.  In 1973, Governor Walker pardoned Swenson, thereby erasing the record of his 1971 jail term, and also pardoned him again in 1975 for a jail sentence that came during another strike.  We had come by a tortuous path, but the barriers to teachers’ organizing and bargaining collectively were falling away at last.
The Many Obstacles to Teachers’ Unions
The evolution of traditional union organization was a slow process among teachers in the United States.  The main reason for this was the bias among teachers and school administrators against trade unions, bias that was incessantly promoted by officials at all levels, as well as by the National Education Association (NEA), the Illinois Education Association (IEA), and other so-called professional organizations.  This bias against unions in education caused direct threats to teachers from school principals and school district superintendents.
Teachers often joined the Illinois Federation of Teachers (IFT) knowing they were endangering their jobs and placing their professional reputations in jeopardy.  Political officials and others with power over education at the state and national levels were only too happy to cooperate in efforts to discourage organization by teachers of effective unions to represent their own personal and professional interests.

Before the late 1950s and the early 1960s, teachers in Illinois and the rest of the country generally did not participate in a formal process to establish their salaries and working conditions or to influence policies that affected the nature and quality of their services. Teachers beyond the Law tells how a group of groundbreaking educators organized unions and established collective bargaining as a process to determine their own economic and professional destinies.

Because the laws of the state and nation not only gave little recognition to their rights but also actually established multiple layers of legal and bureaucratic barriers to their unions, teachers and their leaders were frequently punished for using traditional union methods to assert their rights as citizens and professionals. They were discriminated against or fired for joining unions or participating in union activities. Courts routinely enjoined their unions from striking, sometimes without a hearing, and jailed leaders and members for refusing to cease striking until they had negotiated satisfactory agreements with their employers.

The Illinois Federation of Teachers successfully opposed many efforts to pacify teachers and other public employees with legislative bills that would have mandated recognition of their unions but also prohibited strikes. Finally, in 1983, after decades of effort and self-sacrifice by union leaders and members, the Illinois legislature and governor enacted laws regulating and supporting collective bargaining for teachers and other public employees without restrictions on the right to strike.

Teachers beyond the Law tells the true story of how these courageous teachers took a stand and changed the world.

Oscar Weil was a career high school and college English and history teacher with degrees from McKendree College in Illinois and Washington University in Missouri who became executive director of the Illinois Federation of Teachers. He led in organizing teachers’ unions and bargaining strike settlements and contracts, often in defiance of courts. He was also a lobbyist for teachers and an official of other union groups.