Memoirs of My Love Affair with Ireland 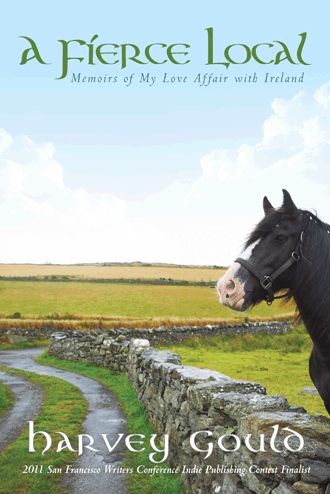 I’m not superstitious so I placed no significance in the fact that when my wife Karen and I left for Ireland in 2006, it was our thirteenth trip to the Old Sod. In fact it did turn out to be an unlucky number. During that trip I spent a lot of time in the Cancer Day Ward at the Mid-Western Regional Hospital in Limerick.

That year Karen and I were in the early stages of one of our many extended vacations in Adare when, feeling poorly, I visited a doctor in Croagh (pronounced “Croak”.) After telling her about my chronic blood disorder, she drew some vials of my blood and sent Karen and me to the hospital lab. Three hours later, the doctor called Karen and said, “Get your husband to casualty (the emergency room) now. He needs a blood transfusion. Fast.”

...[A]t the Cancer Day Ward ...I played Count Dracula as the doctors fed my need for more and more blood. Patients and their loved ones sat on reclining chairs at round tables and struck up conversations. No one ever asked about one another’s disease. We all knew that everyone there was receiving chemo, blood, or some other life-saving treatment. We all knew that no one was there for the fun of it. This was a place where death sat patiently and quietly at some of those tables, but in the Irish way, that was no reason to be morose. In fact it was all the more reason to engage in some good craic. Christ, this might be the last time to have a good chat or an opportunity to tell a joke or to tell and listen to some good stories! I had some of my best-ever belly laughs with other patients around those tables. For me this could have been Ireland at its darkest. Instead, it was Ireland at its best.

And so over the course of three weeks on seven separate days I received a total of twelve units of blood. This was a fair slug, since the typical human body holds only ten. As I saw it, by the end of the process, all of my American blood, and then some, had been replaced by Irish blood. It’s rare enough for a Yank to be considered a fierce local. I’d taken matters to a new extreme. I had now gone where few Americans had ever gone before. I’d become a full-blooded Irishman.

Not bad for a Jewish kid from Chicago.

From the Chapter Fox Hunting with the Clare Foxhounds:

I also noticed a few riders had a stiff leather strap over the front of their saddles. I asked one of them, “What’s that?”

“I beg your pardon?”

“A Jaysuz strap. You know.”

“When yer takin’ a jump and you jest know yer about to come off and you’ve got nothin’ left to do, you pray to Jayzuz, Mary, and Joseph to keep you safe as yer grabbin’ the Jayzuz strap, hopin’ yer prayer is heard and they'll keep you in the saddle.”

I had no Jayzuz strap, so I guessed the best I could do was a quick conversion; if necessary, I could then pray to Jayzuz. Damn! There wasn’t time. All around the village I heard the clippety-clop of the hooves of fifty or sixty horses on the pavement. Many were snorting or neighing with excitement, knowing that soon they’d be flying across open fields and jumping their hearts out. Some pawed the ground, but by then Seamus was fine. I was still walking him in a nice wide circle, getting him, and a hell of a lot more importantly me, mentally ready for what we were about to start.

Out in the fields, I had no real sense of where I was in relationship to Ruan. At times we backtracked to some portion of the village, typically to jump a stone wall onto the road, sliding a bit because it was wet from the rain, then within two steps, jump the wall on the other side of the road into another field. Perhaps four or five times during the hunt, Martin appeared at some juncture when we were criss-crossing the village. He cupped his hands and yelled, “Are you OK, lad?” Thundering past him I turned my head and yelled back, “Doing just fine, Martin!” Later, I told Louis how nice it was of Martin to repeatedly check on me. He laughed. “He was checking to make sure that you weren’t so tired or riding so poorly that you were going to kill yourself and, more important, his horse. So he was continuing to offer you a way out.” Damn. I liked my romantic version better.

After a twelve-year courtship, author Harvey Gould, a nice Jewish boy from Chicago, marries Karen Duffy, a beautiful, Irish-Catholic lass from Manhattan. Karen instills in Harvey her love of horses, family history, and Ireland itself, and the two embark on twenty years of adventures in the Old Sod.

In this memoir, Gould offers a vivid picture of what it’s like to travel and live in Ireland. From riding in foxhunts to Irish step-dancing on a pub’s dirt floor to drinking Guinness directly from the tap, A Fierce Local presents a firsthand look into Irish history, its social customs, and its culture. He also writes of returning to the tiny village of Adare, where they became so integrated into the local life the residents accept them as two of their own and bestow on them the honored moniker of “fierce locals.”

A Fierce Local also narrates Gould’s personal story as he’s diagnosed with a terminal disease and given five years to live. His battle teaches him universal lessons and deepens his ardor for life, his wife, and for Ireland. With humor and pathos, this account shares tales about the country’s people and places—the site of a never-ending love affair.

Harvey Gould worked as a trial lawyer for more than forty years. He and his wife, Karen, and their four cats split their time between San Francisco and Sonoma County where they continue to pursue their passion for horseback riding.