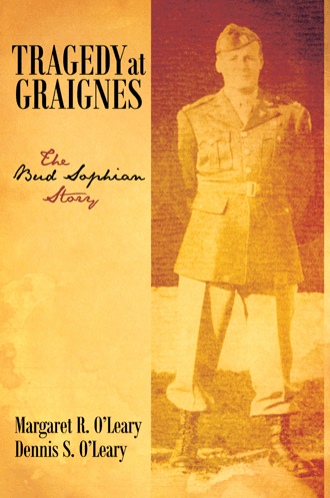 The tiny French farming village of Graignes is located near the neck of the Cotentin Peninsula. Its location was so far south of Operation Overlord on D-day that it was not recorded on the official Operation Overlord military map. In other words, the map ended slightly below Carentan at the neck of Cotentin Peninsula; Graignes was less than five miles further southeast of Carentan across low swampy land at or below sea level.

Graignes consisted of about two hundred widely dispersed farmhouses and a few places of business, including the café and small grocery owned and operated by Madame Germaine Boursier. Graignes also was home to a twelfth-century Norman church with a belfry that overlooked miles of flat flooded terrain.

The Germans were struggling to find enough soldiers to fight on their eastern and western fronts and so had not occupied Graignes prior to Operation Overlord despite the village’s strategic location. Graignes citizens thus were surprised on the morning of June 6, 1944, when wet, bedraggled, and disoriented paratroopers with faces painted black knocked at their café, church, and farmhouse doors.

Tragedy at Graignes tells the story of Captain Bud Sophian, the only US Army officer who did not flee Graignes, France, as the Waffen SS overran the American positions and stormed the village. Sophian was a surgeon, and he refused to abandon the fourteen wounded paratroopers in his care. He surrendered by waving a white flag at the door of the badly shelled Norman church where his aid station was located. He hoped for fair prisoner treatment in accordance with the Geneva Convention of 1929. The German troops instead committed unspeakable atrocities, leaving many of the American prisoners mutilated in grotesque heaps. All of the American prisoners, including Sophian, were killed.

Captain Sophian’s judgment and actions in the US Army were the culmination of the rich and challenging life he led prior to the Second World War. Bud’s correspondence with his sister and other Sophian archival materials tell the story of this compelling life. These letters are reproduced verbatim in Tragedy at Graignes: The Bud Sophian Story so that Bud and other authors may speak directly to you and to the historical record.

Dennis S. O’Leary, MD, is a former medical professor and hospital dean, an emeritus accrediting body CEO, and the nephew of the hero of this book. He enjoys health policy, crossword puzzles, and dachshunds.