The True Story of the Crawford Family Murders 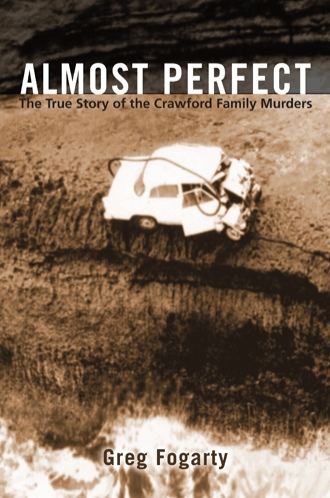 The neighborhood children never really understood the tragedy that made them snatch furtive glances as they pedalled their bikes furiously past the abandoned brick house. The horrifying stories surrounding this unremarkable dwelling filled young heads with images of dead children and of a house, not unlike their own, spattered in blood. Everyone had a different story to tell, and a popular rumour circulated that three brand-new bicycles were locked away in the ramshackle garage attached to the house, left behind by the children who once lived here. Sometimes, the more daring would run up and peek through the windows of the small caravan sitting in the front yard, but few dared to venture the few extra metres to the garage doors. As time passed, the house remained empty and dead; even the industrious vandals who roamed Glenroy gave it a wide berth. With its overgrown garden and decaying, neglected facade, 136 Cardinal Road slowly took on the persona of a classic haunted house. Tucked away in the Melbourne suburb of Glenroy is a citadel belonging to the Salvation Army. Constructed of brick, the building is built over two standard suburban blocks and stands out amongst the more conventional red tiled roofs and neat lawns of its immediate residential neighbours. In 1970, the citadel was much smaller, and made of wood. Painted brilliant white, it was no less imposing then than it is today. Primarily used for religious services, it also catered for community activities supported by the church. A big part of the Army is their music and every Wednesday night the Glenroy citadel hosted choir practise, or songsters. Budding Salvo musicians would gather at the hall to practise their singing and music, and it wasn't uncommon on a balmy summer's evening to see people out for a walk stop and enjoy the music for a while. Wednesday, July 1, 1970, was no exception to the practice schedule, although there was no-one out walking on this particular evening - it was mid-winter, dark and freezing cold. Malcolm Thompson had arrived for music practice about 7.30 p.m. and parked his car in the front yard of the citadel. Walking towards the church, he noticed that the neighbours' car, an older model FB Holden, was parked near the front gate of their home, almost on the footpath. He considered this a little unusual; he knew the Crawfords well and had never seen their car parked there before. A few minutes after arriving he had to go out on a short errand and saw that the car had now been moved to the end of the driveway, up against the garage doors. By the time Thompson returned from his errand, the citadel was full and practice was well under way. Outside, vague echoes of music and song could be heard in the wintry night air, interrupted only by the passing of an occasional car. Next door, the Crawford family were settling in for the evening. With her domestic duties finished for the day Theresa Crawford plopped herself in her favourite chair. Exhausted, she turned the chair to face directly into the warmth of the briquette fireplace. Karen, the youngest child, had been sick with a toothache for two days and had kept the whole family awake the previous night. But now with the three children tucked up in bed and her husband Elmer out working in his garage, it was time to relax. She slipped on a pair of comfortable vinyl "jiffy" slippers and began penning a letter to her sister, Vonny, who lived in Queensland. She had managed only a few lines when she heard the back door open, followed shortly by Elmer’s familiar footsteps padding up the hallway. Taking no notice, she continued to write. Sensing his presence in the living room a few moments later, Theresa put down her pen and paper and turned her head towards the living room door. Elmer stood directly behind her and, before she had a chance to speak, he brought a thick piece of lead-filled rubber hose crashing down on her head. Theresa groaned slightly and slumped unconscious to the floor. Grabbing her by the arms, Crawford dragged his wife out into the hallway, then into the master bedroom. Her slippers came off near the chair as he dragged her prostrate figure across the living room floor towards the door that lead to the hallway. He lifted her heavy, limp figure onto the double bed - she was still breathing. Putting his plan into action, Crawford picked up two of the strange looking devices he’d made. Each consisted of a length of cable with an alligator clip on one end and a three-pin electrical plug on the other. He attached one clip to his unconscious wife’s right earlobe, and the other to the fleshy area between the thumb and index finger of her right hand. What Crawford did next simply defies belief - he plugged the other end of the two leads into the wall socket and switched the power on. Theresa Crawford died almost instantly as 240 volts of electricity blasted through her body. The electrified clips left ugly burn marks on her hand and ear, the path of the current burning yellow-brown welts into her neck. Normally, the resistance of such a current through a human body would blow the fuses - but the well-laid plans of Crawford saw that this would not happen. He had replaced two fuses in the meter box, substituting the thin fuse wire with a strand of normal electrical cable. This ensured the power stayed on while he carried out his deeds. Theresa's unborn child died with her. Once certain she was dead, Crawford switched off the electricity and left his burnt wife lying on the bed. Picking up a hammer he had placed under the double bed, he walked out into the hallway and then into his two little girls' bedroom. The glow of a night-light in the hallway faintly illuminated the girls' room.

On July 2, 1970, tourists in Australia spotted a smashed car, teetering precariously on a cliff edge, overlooking the raging ocean below. It seemed the car would fall into the water at any moment, but the car lingered … as did a mystery, revealed when police traced the license plate to the Crawford household. Here, the police discovered the shocking truth: a mother and her three children had been murdered, with the husband and father—now missing—the main suspect.

The quadruple homicide sent a wave of panic through Australia. Where was the husband? And what would make a father kill his own children? There was much speculation but few answers, as the Crawford patriarch remained missing. Forty years passed—forty years of “Australia’s Most Wanted,” police dead ends, and silence … until an unidentified body appears in a Texas morgue.

Almost Perfect is the firsthand look at a terrible crime from the perspective of Greg Fogarty—a neighbor to the Crawford family and later a member of the Victoria Police Force, Australia. Using his skills of observation and investigation, Fogarty has put together a tragic and detailed crime narrative with a shocking conclusion. Could a morgue in San Angelo, Texas, hold the body of Australia’s most sought-after murderer … or will the Crawford homicide remain unsolved forever?

Greg Fogartywas raised in Melbourne Australia. At the age of nine, a family was brutally murdered in the street where he lived. Almost Perfect is the culmination of years of research into what is still today, Australia's greatest unsolved murder mystery. A former police officer, Greg now resides in Denver Colorado, where he volunteers for Every Creature Counts and works as a software engineer.