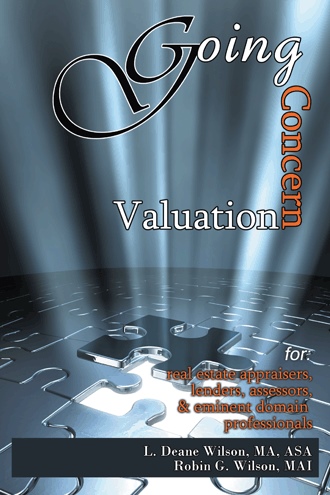 A principle is an accepted or professed rule of action or conduct. In order for our position to be accepted, it should follow accepted rules. In the case of going concern valuation, several appraisal/economic principles serve as a foundation for our suggested course of action or conduct. Reviewing the foundational principles offers an imperative for determining what ought to be allocated when considering possible going concern candidates. Our focus will be on those principles most pertinent to our topic. We should note that all of these principles are intertwined. Furthermore, we are presenting these principles in a real estate appraisal context. Lastly, we are assuming that the reader is familiar with these basic real estate valuation principles, as our intent is not to redefine them, but to apply them to the going concern value concept.

Agents of Production - According to the 13th Edition, “Traditional economic theory holds that four agents of production are combined to create real estate and the sum of the costs to develop a property is one of the basic measures of real property.” The 13th Edition goes on to say “a finished real estate product is created by combining land, labor, capital, and entrepreneurial coordination.” Real estate development has a starting point and an ending point; usually starting with the purchase of land. This usually is followed by labor necessary to develop the land. All the appraisal books we read espouse this order, as does the series on development by the Urban Land Institute. The next agent to follow land and labor is capital. Whether that capital comes from financial institutions or from private sources, for a development to be feasible, capital must be paid back (return of) and must have some measure of return on that capital. The last agent is coordination, sometimes called management, and sometimes called entrepreneurship. As the 13th Edition states, “No prudent developer will undertake to construct and market a property without anticipating receipt of a profit in addition to the return of the equity investment.” Many other books on real estate appraisal theory and development support this concept. Furthermore, we hold that this is the correct order for the agents of production. In other words, this is the order followed by the anticipated incomes generated from real estate. Thus, land is paid first; labor next, capital after that, and lastly coordination. As will be shown later, the order in which the agents are paid is significant.

Surplus Productivity - The next principle we will discuss is Surplus Productivity. The Appraisal Institute defines Surplus Productivity as, “the net income to the land remaining after the costs of the other agents of production have been paid.” According to this principle, it is widely held that the agents (costs) of production (labor, capital, and entrepreneurial coordination), must be satisfied (paid), before there is any surplus productivity to the land. Furthermore, The Appraisal of Real Estate states, “value can be derived through systematic analysis of each of these components, their relationships, and their relationship to the property as a whole.” In other words, for value to be achieved, all of the agents must be paid. Simply put none of these agents work free. More discussion on these first two principles and their interrelation follows.

Balance – The Principle of Balance holds that real property value is created and sustained when contrasting, opposing, or interacting elements are in a state of equilibrium. The agents of production are required to be in balance in order to maximize value. In a normal market, for example, let us assume that there is a limited amount of money in the market to build a property (by money in the market we mean funds to build or purchase the property.) It does not matter whether the property is a single-family residence or a high-rise office building. If the amount of money in the market is insufficient to pay for these agents, there is a strong likelihood that the building will not be built. This, of course excludes market abnormalities or hedonic influences. The theory dictates that all of the agents must be paid. Labor and entrepreneurial coordination will not work free and capital does not come without a return on that capital, and of course, land has a price as well. It stands to reason that if the price or cost of the land, labor, and capital are acknowledged, and the desires of the entrepreneur or developer is recognized, and the final product price is determined by the market, and that price satisfies each of the agents at their established levels, then unless one of the agents relinquishes their share or a portion thereof, it defies economic theory (as well as logic) that there would be any money available for a fifth agent.

These three principles, Agents of Production, Surplus Productivity and Balance, have stood the test of time and there are no known arguments contrary to their theory. Given that these principles are sound, and that the agents must be paid, the complexity and controversy is in the allocation and (not the order) in which the money is distributed to the agents. This concept, while complex, is easier to comprehend when we consider a retail strip center where the income generated to pay the agents is in the form of rent paid by the tenants. When a property’s income is generated by the business, as in our car wash example, rather than from rent paid by tenants, such as the case with a retail strip center, it is not clear how much income goes to each of the Agents. Does this mean the business enterprise is actually a fifth agent when it comes to going concern properties, or is the business enterprise a combination of the labor and coordination?

According to Kinnard and Fisher , “the capitalized present value of the residual income stream creates an intangible business enterprise value that should not be imputed to the land . . . a fourth agent, entrepreneurship, not the land is the residual agent.” It is important to understand the intent of the author. We think that Kinnard and Fisher are not arguing for a fifth agent, we understand their argument is that entrepreneurship gets the surplus, not the land. Again, according to the hierarchy of the agents of production, then it would be paid after all the other agents have been paid. (From a purely theoretical perspective, there well might be a fifth agent when the property is a going concern property if entrepreneurship is not included in the labor and or coordination, such as our car wash.) Nonetheless, we do not see a fifth agent in the more traditional real estate property, such as an apartment complex or a shopping center. Moreover, and worth repeating is, if there were a fifth agent in a going concern property, then it would be the last to be paid. This of course assumes that the preceding economic theories are correct. Even if there is a fifth agent, there is still one major hurdle that needs to be cleared for the business enterprise to have value over and above the real estate. According to the same economic theory, for value to exist, there must be demand, utility, scarcity, and transferability. We think the answer lies in these elements of value.

Value – The term “value” is derived from the Latin valere, and means to be worth. As defined by The Appraisal of Real Estate, value is “the monetary worth of a property, good, or service to buyers and seller . . . .” In addition, the book notes “To avoid confusion, appraisers do not use the word value alone.” We agree with that caveat, but we want our attention to be on the concept of value in a general economic context. According to this theory, for anything to have value, it must have the four basic characteristics that create value.

“Our purpose in writing this book is multifaceted. First, this book aims to present a clear understanding of going concern valuations, at the same time resolving the current misrepresentations surrounding the issue.

Additionally, this book offers a new set of rules readers can use to determine which property types qualify as going concern valuations and which do not.”

This book presents an understanding that in performing a Going Concern Valuation of properties which are perceived to have a business component, it may not be possible to segregate, allocate, or value the components individually.

“For example, when appraising the going concern value of a motel with occupancy of 75% it could be argued and possibly proven that there is a value that can be separated from the overall value, or going concern value, to the business component. On the other hand, however, appraising that same motel with only 40% occupancy presents a completely different set of circumstances that could easily draw completely opposite conclusions. It simply may be a lack of sufficient tools or data to argue and prove that the business component in fact has value separate from the real estate. To do so with authority is tantamount to ignorance or arrogance.”

L. Deane Wilson, MA, ASA, is the founder of the Blackwell Group, a real estate appraisal firm with offices in California. He holds a bachelor’s degree in organizational leadership from Biola University, and he has a special major master’s degree in land use ethics from California State University. He has earned the Senior Real Property appraisal designation awarded by the American Society of Appraisers and teaches real estate courses throughout the world.