A Collection of Chaos 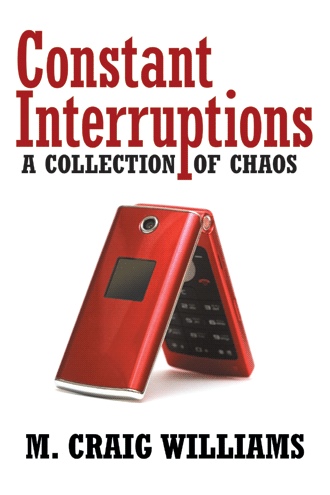 I mention Auntie for two key reasons. First, it explains why I had to wait a few days for my wife’s bold-faced cat, Vengeance, to deliver me from the cold, hard clutches of my licentious kitchen tiles. If my amorous and eager wife were home, I would have only waited until she needed some household chore performed, which is frequent when she and I are in the same room, especially when she cunningly lures me into the master bedroom. The other reason I mention Melba is that she completed her first and only savage stab at authorship. In the twilight of her days, Great-Auntie Melba decided to share all of the pain, sorrow, suffering, tears, terrors, setbacks, and failures of her otherwise happy and carefree life. It was later said that Auntie Melba’s golden years were her shortest, oddest, and finest because while she wrote so many, many words, she said so very, very little. Great-Auntie Melba assigned me the rare honor and uncontested privilege of editing her masterpiece. Auntie did so because I was young and tender, much like my titillating and timeless wife, who is late for everything and who faints at the mere sight of me when I am swollen, and because my dear auntie’s eyes were poor, and because she unselfishly paid no attention to the needs or wants of others. The spinster wrote an epic romance entitled The Weeping, Broken Heart of Brokenness: A Tale of Tragedy, Woe and Other Much Sought-After Pleasantries. Oddly enough, Barnes & Noble and Amazon.com both decided to let it drift by them. With such an awe-inspiring title, Auntie Melba seriously considered me, the most uninspiring person she knew, to be the only one perfect for the job. When I gently inquired if my older elder had ever considered making the title just an itty-bitty bit shorter, she bade me to draw near, and responded as any refined person raised in a civilized household with loving and caring parents would—Auntie Melba swiftly whacked me on my numb noggin. After the pugnacious pleasantries ended, she informed me that the original title, The Deeply Weeping, Truly Broken, Pure Heart of Utter Ruin and Brokenness: An Epic Tale of Tragic Tragedy, Woeful Woes and Many Other Wondrous and Much Sought-After Delightful Pleasantries was rejected by her no-talent, blithering publisher. Auntie loathed the present title and referred to it as a sputtering Spartan curse that barely passed for intelligent reading. Yes, it was this literary jewel I poured my heart, soul, and scorn into and over when, suddenly, I viciously succumbed to an extreme and sudden case of what my doctor describes as effemititis. Simply put in layman’s terms, for the well-read and bred, an estrogen coma. While not immediately fatal, estrogen comas, if experienced in sufficient intensity and frequency, either slowly kill a man or, worse yet, leave him giggly and girlish, thus limiting his career choices down to fashionista, the dreaded stay-at-home dad, or absolutely nothing at all. - An Excerpt from Estrogen Comas

“Mr. Williams’s book is completely outrageous! If Mr. Williams thinks he’s funny then he’d better learn to ignore all of the simpletons who have the courage to laugh at his numerous valid points and entertaining shenanigans!” —Ms. Ethel Moore-Moore of the Young Eager Lady Libertarians The fine art of satire is reborn through the breakout brilliance of M. Craig Williams. Boldly combining normal, everyday life with offbeat characters, comedic circumstances, and heartrending reflections from his unlimited imagination, Constant Interruptions is Williams’s triumphant literary début. From his humble abode in the fictional city of Umbrage, Ontario, Craig warmly invites you to join him on an epic, life-changing journey into the realm of the politically incorrect. Hopping from café to café, through the winding streets of his fictional hometown, Williams introduces, in his distinctively informal style, a collection of endearing and ironic individuals whose frantic antics are certain to entertain readers of all ages. Constant Interruptions openly examines the subtle intricacies of our delicate human nature in a refreshing manner. The lovable lives of Craig’s creations grant us a glimpse at our own personal quest for purpose and recognition.

M. Craig Williams embraced the fine art of quick wits during the lively but turbulent years of his early life. He struggled in several careers until he rediscovered his one true passion—writing. Williams and his family currently make their home in the majestic city of Cambridge, Ontario, Canada.