A Young Woman’s Survival of the Holocaust 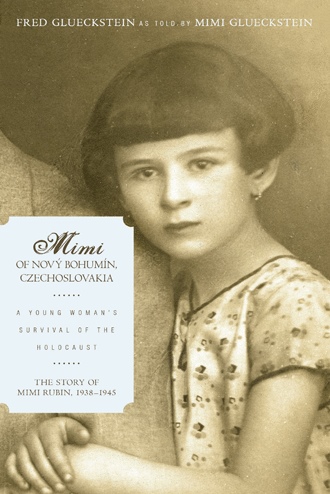 Before the madness was unleashed, one of my fondest memories was the delicious Stachelberrn. It grew in the backyard of my grandparent’s apartment building, where I lived with my family. The oval, green looking-grapes with stripes, more commonly known as gooseberries, were sweet and aromatic. The Stachelberrn grew on spiny bushes near the nice little garden and cherry tree, alongside another of my favorites, the Ribiseln, or red currants. The fruits grew close to the cottage that sometimes was rented, near my grandfather’s Sukkah, where he took his meals during the Jewish festival of Sukkot.

Mimi Rubin had fond memories of growing up in Nový Bohumín, Czechoslovakia, a place that ten thousand people called home. It was a tranquil town until September 1, 1939, when the German army invaded the city. From that day forward, eighteen-year-old Mimi would face some of the harshest moments of her life.

This memoir follows Mimi’s story—from her idyllic life in Nový Bohumín before the invasion, to being transported to a Jewish ghetto, to living in three different German concentration camps, and finally, to liberation. It tells of the heartbreaking loss of her parents, grandmother, and countless other friends and relatives. It tells of the tempered joys of being reunited with her sister and of finding love, marrying, and raising a family.

A compelling firsthand account, Mimi of Nový Bohumín, Czechoslovakia: A Young Woman’s Survival of the Holocaust weaves the personal, yet horrifying, details of Mimi’s experience with historical facts about this era in history. This story helps keep alive the memory of the millions of innocent men, women, and children who died in the German concentration camps during the 1930s and 1940s.

Fred Glueckstein is a columnist for the Phelps Equestrian Sports Network and the author of The ’27 Yankees, Mickey Mantle: Rookie in Pinstripes, Men, Women and Horses and Churchill and Colonist II: The Story of Winston Churchill and His Famous Race Horse. He has written articles for a variety of publications. Glueckstein and his wife Eileen have two children, Brian and Debra.