My Journey Back from a Childhood of Abuse 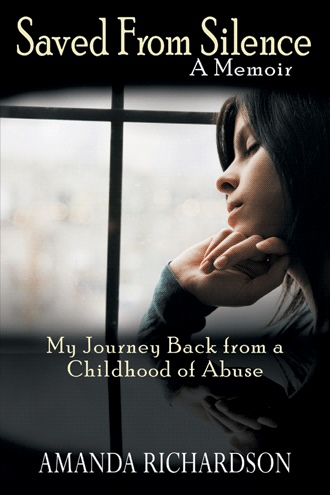 Amanda and her family seemed to be the perfect family. But the secrets they hid beneath the surface were destroying Amanda’s life. Though friends and relatives knew that her father—an upstanding citizen, a contributing member of society, and a religious family leader—was strict, they had no knowledge of the physical, mental, and emotional torture he inflicted upon Amanda and her brother, David. After four years of sexual abuse, Amanda felt like an empty shell of a human being, incapable of any productive future.

In Saved from Silence, author Amanda Richardson explores the doubts, fears, and perplexities of the abuse that took place in her childhood. She especially yearned for validation from her mother, who steadfastly refused to acknowledge that the abuse had even occurred. Each confrontation with her mother was met with rejection, blame, and failure. After years of therapy, love, support, and prayer, Amanda has broken her silence, confronted her abuser, and made herself whole.

An honest and courageous memoir, Saved from Silence not only shares Amanda’s personal, heart-wrenching story of abuse, but serves to impart a greater awareness and understanding of child abuse and its depth, severity, and long-term effects, for which early intervention is a key element to healing and recovery.

Author and speaker, Amanda Richardson, still resides in the suburban East Texas town where she was born and raised. She and her husband, Daniel, have one child. She currently works as a dental hygienist and a dental hygiene educator.