Before It's Too Late

A Parent’s Guide on Teens, Sex, and Sanity

by Sheila Overton & With Treacy Colbert 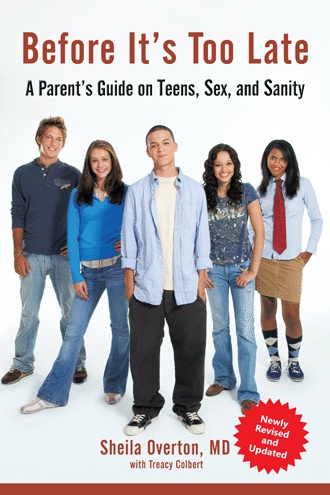 Chapter 1: Protecting Your Teen: Sharpening Skills for a New Phase

Talking to tweens and teens about sex—it can bring otherwise confident, assertive, successful, and powerful people to their knees. I’ve witnessed this scenario over and over again in my career as a physician who emphasizes teen pregnancy and STD prevention.

Preventing teen pregnancy and STDs and raising sexually healthy children requires frequent, ongoing conversations about sex, and consistent pointers and reminders. Unfortunately, too many parents evade this task. The magnitude of parental reluctance to discuss sex with their kids is highlighted in a recent survey in which the vast majority of parents of 10- to 12-year-old children attending focus groups felt that they should talk to their children about sex, but many had not done so. The two top barriers reported by these parents were feeling uncomfortable and thinking that someone else would be better at it.

Chapter 5: Talking With and Guiding Your Teen About Sex: What Parents Really Need to Know

Listen and Speak with Love.

In our fast-paced, technologically advanced, and goal-oriented society, it can be easy to overlook the most important, guiding force that we, as parents own—our love for our children. Loving our teens and expressing that love are not synonymous.

It’s important to let our teens know, often, that they are special and precious to us and that our love for them is unconditional. When our teens are certain of this love, they are more likely to listen to and heed our advice. For even when they roll their eyes at our comments or tell us that they “hate us,” the love bond that we have forged will always be there, like an anchor that keeps them steady.

Many teens just do not perceive themselves as someone who can become pregnant, even when they are having sex. You’ve probably heard of teens’ false sense of invincibility. This explains why teens sometimes do reckless things like illegally racing cars, experimenting with drugs, and yes, having unprotected sex.

It’s more than just a notion with teen girls and sex. I stopped being perplexed and really starting understanding the teen mind when pregnant teen after pregnant teen remarked that she “just didn’t think it would happen to me,” or “I just kind of never really thought about becoming pregnant as a real possibility,” or “We just never thought about using birth control.” These responses serve to remind us that teens’ capacity to truly consider the consequences for certain actions, like unprotected sex, is different from adults. This capacity won’t fully develop until adulthood, as pointed out in this anonymous saying: “There is nothing wrong with today’s teenagers that 20 years won’t cure.”

Dr. Overton, an OB/GYN physician, offers a fresh perspective and medical expertise in this thoughtful, comprehensive guide. Before It's Too Late educates parents about key teen sexual health issues and empowers them to guide their children to values-based, smart, and healthy decisions about sex.

"Dr. Overton has created this must-have resource for parents. A comprehensive, medically accurate guide that any parent, no matter the age of your child, can benefit from".
Patricia Paluzzi, DrPH, CNM, President and CEO Healthy Teen Network

Sheila Overton, MD, a board certified OB/GYN for more than 25 years, passionately advocates prevention of teen pregnancy and STDs. Through seminars, talks, interviews and articles, as well as her practice, she has helped parents and teens transform the way they think and talk about sexual health. Her awards include the Los Angeles County Commendation for Excellence in Women's Health. She is married and blessed with two adult children.

Treacy Colbert is a writer and editor specializing in health care and business. She lives in southern California with her husband and son.