The Flavors of Phillies Nation

by Brian Michael & With Garry Maddox 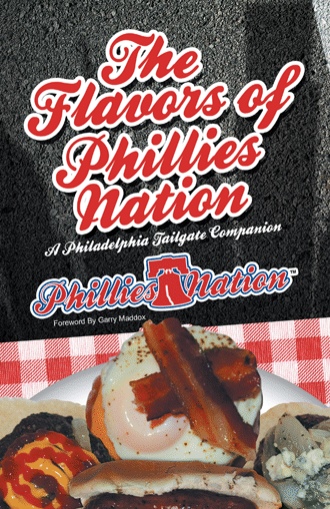 The History of the Tailgate

If you search the history of the tailgate, you’ll find it began just a short trip up Route-1 in New Brunswick, New Jersey, during a Rutgers-Princeton football game. The year was 1869 and it forever changed the way sporting events would be enjoyed.
What began as a “college football thing” slowly transitioned into a baseball experience as well. In the 1920s and 30s, the pre-game ritual came into its own, with fans dressing in their Sunday finest, and women sporting their hometown team’s colors by way of corsage.

As the automobile became more popular through World War II, so did the tailgate experience. Making it easier for fans to celebrate before the sporting event, cars gave people a way to mix the two. And, according to Stephen Linn, author of The Ultimate Tailgaters Handbook, this practice is where the term “tailgating” was born. Perhaps fueled by the baby boom of the 1950’s, the station wagon was the ultimate vehicle for the family. It also allowed for the pre-game party to go mobile.

The tailgate as we know it rounded into form in the 1980’s as gas grills became smaller and easier to transport and parking lots were a welcoming haven for the fanatical fan, who would show up complete with flags, team gear, and in recent times, a television. The evolution of the gas-powered generator has allowed for a whole assortment of electronics to be brought along.

Fast forward to our present day gatherings, which now consist of monster grills, elaborate motorized coolers, and an array of entertaining recreation (cornhole, anyone?). Prior to a sporting event, it’s almost a given that you’ll find a pigskin flying through the air, no matter the sport taking place inside the stadium. The tailgate is not exclusive to just contests that use a ball or bat.

“Deadheads” made tailgating a must for concertgoers in the 60s and 70s, when drugs, sex, and rock and roll were part of the pre-game menu. Nowadays, good luck finding a show in the summer months that does not include some sort of entertainment beforehand in the lots.

But whatever the occasion, tailgating can be an exciting way to begin your gameday (or concert day) experience. There’s nothing like sharing the camaraderie of an ice-cold beverage to go with a burger and a dog, with some of your best friends and fellow worshippers. It’s become just as, if not more, important than the game itself.

See you in the parking lot!

The Flavors of Phillies Nation is a collection of fan recipes that inspires sports fans across the nation to savor a tailgating atmosphere and hit a home run with unforgettable cuisine. “Whether you’re a newcomer to the world of tailgating or a seasoned pro, I invite you to enjoy the recipes herein and taste the passion that inspired them.” —Garry Maddox, former Phillies center fielder

Brian Michael edited this collection of recipes from the readers of PhilliesNation.com after flipping burgers for thousands of Phillies fans in parking lots around the country. A lifelong Phillies fan from Northeast Philadelphia, Brian has grown Phillies Nation into the premiere community for Phillies fans with events, merchandise, a television show, and a charitable foundation.