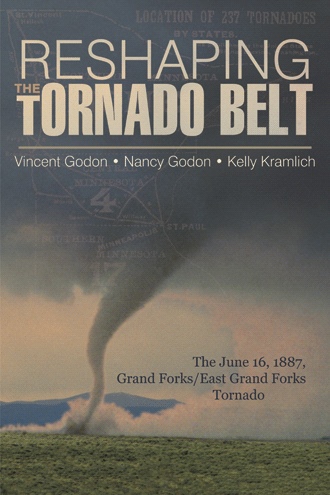 "In addition to the damages to buildings, homes and other structures, it also appears telegraph communications were completely knocked out to or from Grand Forks and East Grand Forks, essentially isolating the two towns from the outside world. The twenty mile long damage path from the Grand Forks/East Grand Forks tornado nearly paralleled the east-west line of the St. Paul, Minneapolis and Manitoba Railroad. North-south telegraph lines also took a beating, from five miles north of Grand Forks (the northern damage path) to eight miles south of Grand Forks (the southern damage path). All told, nearly fifteen miles of north-south telegraph lines were hit with strong winds. Since the Grand Forks/East Grand Forks area was located almost in the middle of this twenty mile long by fifteen mile wide damage sector, all the telegraph lines out of the twin towns were at the mercy of the storm." “The rear coach, smoking car and caboose of the southbound train on the Neche division of the Manitoba road were blown from the track at Pearson, 5 miles north of here [Grand Forks], the passenger coach turning a complete somersault. There were 15 passengers in the coach, 6 of whom were women, and four in the smoker [car]. A special [train] was at once sent to the scene. Dr. Van Cleve was taken along, who found that none of them were necessarily fatally injured, but several sustained serious injuries."

Even the United States Signal Service believed there was a northern limit for tornadoes in the United States. The frontier towns of Grand Forks and East Grand Forks were located about seventyfive miles north of Fargo, which was thought to be at the northern tip of the “Tornado Belt.” Leaders of each town proudly claimed that their communities did not have to worry about the destructive power of tornadoes.

The tornado of 1887 changed everything. Reshaping the Tornado Belt discusses:

Full of maps and figures and painstakingly researched by three weather professionals, Reshaping the Tornado Belt tells an important story about how a horrific tornado challenged and reshaped two communities and changed how the world looks at tornadoes.

Kelly Kramlich lives in Aberdeen, South Dakota; Vincent and Nancy Godon are married and live in Grand Forks, North Dakota. Each author earned a bachelor’s degree in atmospheric science from the University of North Dakota, where Nancy also earned a master’s degree in geography. All three once worked together at the National Weather Service office in Grand Forks.