Two at a Time

Reflections and Revelations of a Kansas State University Presidency and the Years that Followed. 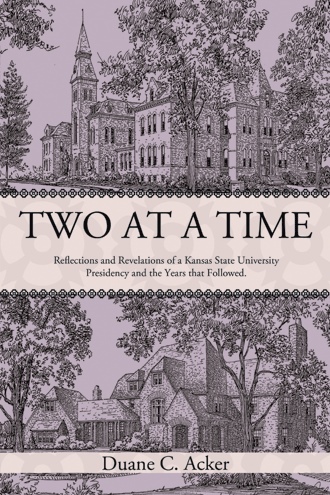 Option for HardCover Back Cover and as a replacement for Marketing Information, Free Preview material in the original submission. On athletics: What next? I had an important and highly public athletics department that had dropped sports for lack of money, had a stack of unpaid bills, had three loans not current, the director had left town the morning after his new president had been apprised of serious financial problems, the Department’s finance officer could provide no useful information, and my finance vice president would have nothing to do with it! On a student protest: At 4 o’clock I was back on campus and on the south steps of Anderson with the “Save the Castle” student leaders and a loud speaker, but only forty to fifty students were on hand. The rally leader turned to me, “Would it be O.K. to delay the rally? Tickets for a rock concert went on sale at 4 and most of our supporters are in the ticket line.” As the leader announced the rally delay until 5 o’clock, two young women from the crowd followed me into Anderson and my office. They apparently wanted to tell me personally why they disagreed with my recommendation to the legislature. One, though, could hardly contain herself. “I’m so excited!” she said, “The protest, I mean. There were several protests while my sister was here and I was afraid I’d go all the way through K-State and there would never be one!” On protecting academic tenure and academic freedom: One of my colleagues criticized me for spending time on this issue, “in the weeds,” he said. However, I had learned in my youth that, if unchecked, weeds can damage a crop. In this case and at this time, the crop was academic tenure, under some attack. One of the weeds was tenure’s inappropriate use. The important issue was to protect academic tenure, the ultimate protection for academic freedom. On the dedication of new dairy facilities: On completion of the new dairy facilities, we scheduled a morning dedication ceremony for this date, then a luncheon for involved faculty, administrators, and industry leaders plus, of course, legislators who had led the appropriation efforts. At we gathered in the Bluemont Room for the luncheon I was especially pleased to see the Union staff had pitchers of milk and plates of cheese on the table. Soon after we were seated, however, I heard an “Oh,oh” from Representative Ambrose Dempsey, a dairy producer from northeastern Kansas. He reached into the dish in front of us and held up a neatly packaged individual serving of margarine!

When Duane Acker assumed the presidency of Kansas State University on July 1, 1975, he inherited both the management team of his 25-year predecessor and their operating traditions. Though universities were past the student unrest days of the Viet Nam era, the average tenure of university presidents was only three and a half years. Acker told his friends his goal was to “survive for six years and stay no more than ten.” Acker shares anecdotally and with some humor a sample of his encounters, several involving pairs. There were the two horse blankets that could not be found for President Reagan’s visit, red-in-the face “debating” by two basketball coaches, the two staff tenure systems he found, his two trips to China and the two franchises he wanted, “lines in the sand” with two local bankers, whether two regents had made their way to Heaven, and strategies that yielded two new building projects at one time, twice. Two at a Time provides a telling glimpse into the life of a state university president and the challenges faced, as well as satisfactions that the presidency yielded for him and his wife. Acker also shares later experiences, and shows that life doesn’t end after a university presidency.

DUANE ACKER was K-State president from 1975 to 1986. He had been a K-State associate dean, a South Dakota State dean and a Nebraska vice chancellor. After the presidency he headed international programs in federal agencies and was assistant secretary at USDA. The Ackers now live on their Iowa farm.