From the Chronicles of Carlson 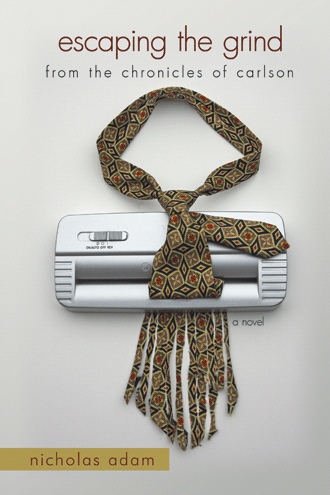 From the Chronicles of Carlson

After blowing a job interview:

Mr. Damian Glenn’s laconic personality was less than endearing. He merely nodded at me when I said hello. In addition, the man tried to crush my hand with his sausage-sized fingers during our handshake, as if it was some sort of contest. I resisted the squeeze the best I could.

I know I babbled far too much, but Mr. Glenn did nothing to hide his boredom. He yawned at least three times and was constantly looking at his gold watch, like he had somewhere better to be.

My casual appearance (disheveled beard, khakis with Birkenstocks and a collarless dress shirt) probably didn’t help either. Mr. Glenn couldn’t have been impressed. Not a single bristle of his salt-and-pepper hair was out of place. He wore a stylish, silver, three-piece suit, but the matching tie was so tight that some of his neck fat spilled over top of the collar. Yes, ties are like a noose around the neck.

On the reality of teenagers:

There were never this many before, and I swear most of them were smoking. Smoking is not allowed on school property. I’d report every last one of them if I knew any of their names.

I tooted my horn. This had little effect, as most of them just looked at me and then continued puffing. Eventually they did shuffle out of the way. One creature, a six-and-a-half-foot colossus with an ugly red goatee, was the last to give way.

On refusing to be defeated:

… by the time we reached the beach area, Andrew Yates knew I’d been chasing Chad toward the water and had gathered most of the class to watch.

“Go Sparrow!” the kids screamed (the kids tease Chad because his legs are thin like a sparrow’s). “Don’t let Mr. Veitch catch you.”

Chad lost a shoe in a puddle, but kept running. I was within three metres. He ran a zigzag pattern. I lunged, but must have missed by mere millimetres.

I dove at Chad and missed again, this time somersaulting onto the packed beach sand, splashing mud pellets on the frenzied crowd.

“Ohhhhhhh,” they hummed in unison.

I finished my roll and landed on two feet. Surprised, Chad made his last play. His only escape route was to run into the water and hope I wouldn’t follow.

After school, I purchased a paperback print of the Merck Manual of Medical Information and read about altitude sickness.

When Teagan invites him to East Africa:

“So I can climb mountains, gorilla trek, watch the wildebeest migration, raft on the Nile, eat wild game meat and see lions, zebra, giraffe, baboons and flamingos all on the same trip?”

When worried about public humiliation:

The relentless teasing from fellow staff members could become unbearable.

On how to prevent chafing:

To shield my nipples from bleeding, I found this “Body-Butter” stuff from the bike shop. The owner also said the Body-Butter can be used under the arms, and Band-Aids over the nipples are a good idea as well.

When reminiscing about a childhood bully:

Terry already had armpit hair in Grade 7 and was shaving. He was one of those guys who grew to five foot six by age 12 but never another inch afterward. Terry used to chase me down during recess and deliver kidney punches to my skinny back. Usually, because I was a good runner, I could get away or hide. One recess I got sick of running.

“Does anyone know what a vasectomy is?” I asked. Andrew raised his hand and said, “I dunno, but I think my dad had one.”

After an invigorating trip through the Rocky Mountains, recent graduate Carlson Veitch lands his first real job. The idealistic young man thinks success will require nothing more than wearing a tie, a regular bedtime and a daily shave. Little does Carlson know that a labour dispute, impossible students and a villainous boss are all ready to test his resolve.

Nicholas Adam’s debut novel Escaping the Grind flings you into the angst-filled world of Carlson Veitch—a world that hovers between irreverence, sardonic humour and just the right touch of young male vulnerability. Then just when you think it’s merely a brilliantly funny book, it sets you down gently into moments that are poignant and heartwarming.

-- Terry Fallis, author of The Best Laid Plans, winner of the Stephen Leacock award for humour

Nicholas Adam has coached and taught teenagers on three different continents and currently resides east of Toronto, Canada. He escapes the grind by traveling the world, competing in triathlons and indulging in the occasional Oreo cookie.