A Man of Substances

The Misdeeds and Growing Pains of a Pot Pioneer 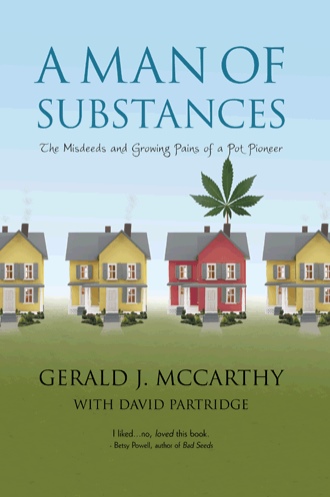 CHAPTER ONE: Can’t you hear me knockin’ Nothing in the movies, no matter how big the screen or mighty the soundtrack, can prepare you for the singular crack of your front door being shredded by a battering ram. It resonates in your internal organs shaking you through to the very core. As the police fly up the stairs of your family home, all gun metal and Kevlar, barking like dogs charging upright, the disorientation from the top of the stairs is palpable. Particularly if you’re stark naked and still slightly high from the night before. When the cops demand to know whether there are others, or weapons, or dogs in the house, it’s hard to focus on anything but the questions at hand. I can tell you from experience that a man with a Glock nine millimeter pressed to his temple tends not to muse on the location of anything; even something as pressing as ones pants. When the arresting officer, having assessed the true nature of the situation, gives his dozen comrades the order to stand down, this is not a time conducive to reflection. You’re occupied with the mortification of your physical situation, the discomfort of the handcuffs and the splinters protruding from the door. But be assured that I’ve had the opportunity and the inclination for plenty of reflection since– in the passing months and years since my arrest I’ve logged many hours on the simple, seminal question: How in heaven’s name did it come to this? How did I, the son of a yawning Ontario town, become the “alleged kingpin” of a multi-million dollar, multi-location, multi-partner marijuana cultivation enterprise? How did a struggling family man become the target of a massive, multi-force police initiative? How did the supposed mastermind of a lucrative and tax-free illicit endeavour become the proud owner of hundreds of thousands of dollars worth of compound interest debt? Well, there’s an answer to that and therein lies our journey. Let’s begin by going back, all the way back, to where my naked encounter with the body armour boys first took root.

When Gerry McCarthy hit the headlines in 1996, he was the man at the center of a five million dollar dope bust, the largest grow-op takedown in Canadian history. But when he hit the big city as a small-town teenager many years before, he was as green as grass. The story in between is a unique and winding journey through the vibrant, revolutionary years of the twentieth century.

A Man of Substances looks unblinkingly at McCarthy’s invention, reaction, and folly over a life on the less sober side of the law. This memoir explores McCarthy’s journey, from a guitar slung across his shoulders to handcuffs around his wrists. In between are the exploits of one of Canada’s marijuana cultivation pioneers, at turns resourceful and rash, sincere and sardonic, hardworking and hammered. He is paperboy and pot dealer, secret keeper and raconteur. He’s a devoted suburban family man with a pound of weed in the second car.

Both entertaining and educational, A Man of Substances reflects the times and the culture of the world in which he grew up and explores that world’s folly and its shadows with equal candor.

Gerald J. McCarthy has entrepreneurial experience in executive transportation, concert promotion and marijuana cultivation. He is available as a public speaker.


David Partridge is an entertainment software veteran. He is a blogger, a songwriter and has written for trade publications.