A Novel of the Vietnam War 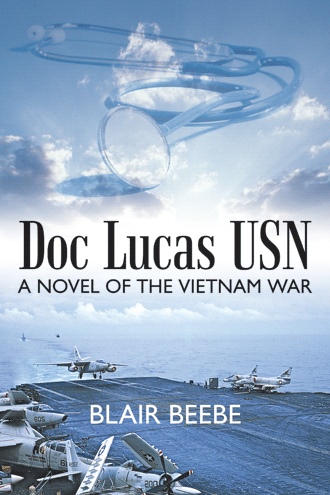 The air ambulance dispatcher kept direct radio contact with the hospital and wasted little time calling me for help. “We’re picking up some casualties; some may be critical. A helicopter will pick you up on the hospital landing pad in three minutes.” I answered, “Wilco,” and grabbed my flight helmet and an emergency surgical bag before dashing to the landing pad. A marine helicopter with a big red cross was hovering, and one of the crewmen reached down and pulled me up before the helicopter touched down. We were off. We passed over the pockmarked trenches at the perimeter of the airbase and headed toward the hilly, jungle-covered terrain at low altitude. Within minutes we approached landing zone, or “LZ,” which the pilot had said was in a relatively flat clearing. He came on the intercom. “I have radio contact with the platoon leader. Listen in.” After a few seconds of static, a marine lieutenant on the ground came on. “We may have a hot LZ.” “What’s the situation right now?” the helicopter pilot said. “It’s quiet, but the helicopters coming in will stir ‘em up.” “How many casualties do you have?” “Looks like seven—two are real bad. They’re still alive, but barely.” We approached the clearing, which was filled with shattered palm trees and craters from mortars. The pilot came back on the intercom. “We’ll be on the ground just long enough for the marines to load the two critically-wounded victims. There’s a helicopter right behind us that will pick up the other five.” Explosions appeared in the clearing just as the helicopter dropped to land. The plunge, the blasts, the noise, the smoke, and the smell disoriented me, but I managed to help load a victim that had been receiving CPR. A soot-covered marine on the ground looked at me with an anguished expression and pointed to the patient. “Mortar blast!” Immediately, the helicopter leaped like a high-speed elevator. Our landing had lasted only seconds, so that the Vietcong had been unable to correct their aim quickly enough before we were gone. The patient on the deck of the helicopter in front of me was struggling with shallow ineffective breaths, and he was panicking with a wild expression in his eyes. His skin had turned the dark blue color of cyanosis, evident even under the black dirt of the battlefield, and he had an agonal look that I had only ever seen before in patients with massive heart attacks. I noted that his trachea had deviated to one side, so I grabbed a large bore needle out of the emergency surgical bag and jabbed it into his chest. Next, I attached IV tubing to the needle and submerged the other end of the tubing in a bag of saline on the deck of the helicopter. Air started to pour out of the tubing into the saline, and almost immediately, the patient began to take deeper breaths. His color improved, and his panicked look faded. I glanced quickly at the other victim, who had suffered a nasty-looking shrapnel wound in his abdomen and was writhing in pain. One of the hospital corpsmen had administered morphine and was applying a dressing while the other was starting an IV. I clicked on the intercom to the pilot. “Connect me to the hospital.” Almost immediately, I heard the voice of Colt Benson. “What have you got?” “Two patients,” I shouted: “one with a shrapnel wound to the abdomen and one with a pneumothorax from a mortar blast. The one with the abdominal wound needs an operating room right away. I’ve inserted a large bore needle into the chest of the victim with the pneumothorax and rigged a siphon, but he needs a chest tube.” In a few minutes the helicopter landed on the hospital pad, and welcoming hands reached for the two patients and lifted them onto gurneys. They wheeled the shrapnel wound victim directly into an operating room and the pneumothorax patient off to X-ray. Surging adrenalin still drove my heart rate and weakened my knees, so I waited a few minutes before climbing out of the helicopter. I was still wearing my flight helmet, and the pilot came on the intercom; “Are they going to make it, Doctor?” “They are going to live.” “I’m glad—we don’t always get here in time.” “Do you often land in the middle of a barrage like that?” “No, that’s the worst I’ve ever seen.” He hesitated. “I don’t know how we made it.” I felt overwhelming nausea but managed to avoid vomiting. “I’m so weak I can hardly move,” I said. “You’ll have to climb out, because the other helicopter will need to land in just a minute.” I wobbled after the pneumothorax victim into X-ray.

Blair Beebe, M.D. Medical lessons from Vietnam; what did we learn? Almost fifty years after the beginning of American involvement in the Vietnam War, we still remain embroiled in military actions that generate disease, disability, and death. Frontline physicians who were in places like Afghanistan, Iraq, Bosnia, Herzegovina, and Vietnam faced the medical consequences of war every day. My new novel, Doc Lucas USN, based on real people and real events, brings the war down to a human scale, one person at a time. History gives us statistics and dates, but fiction helps us to better understand the meaning behind those facts. One of my old professors defined history as “lies we tell about dead people.” We understand more from reading Homer, Sophocles, Shakespeare, Margaret Mitchell, and Stephen Ambrose than we ever learned from dry history textbooks. Paradoxically, the truth comes out in fiction. During my time in Vietnam, and for many years after, I listened to stories from other physicians who served during the war and from naval aviators and marines who faced combat every day. I also heard different points of view from Vietnamese civilians who had come to America to escape the chaos after the war. Their eyewitness accounts are the true history, but unless someone writes them down, we lose them forever. Moreover, individual stories may have little meaning to us if they lack context. I’ve often heard both veterans and civilians say, “I don’t talk about my experiences, because anyone who wasn’t there could never understand how bad it was.” That’s why we need a novel to give us a complete account in an organized way. Each character and each scene moves the action to develop a central theme about the war. We want more than anecdotes. We want to understand the how and the why of the unfolding tragedy. Doc Lucas not only recounts the stories, he lives them. We feel his anxiety, his terror, and at times, his joy. When things go wrong, we know why, and we can feel his despair. In the good times, and there are many, we laugh along with him. In the end, Doc Lucas learns important lessons about himself and his values centered on human rights and the relief of suffering. He emerges from the war better equipped to take his place with stronger convictions about his role in his society.

Blair Beebe, M.D., served as a navy flight surgeon during the Vietnam War and went on to become associate executive director of the Permanente Medical Group, Kaiser Permanente. He previously held a clinical faculty position at Stanford University School of Medicine. Other works include: The Hundred-Year Diet, a book on health promotion and disease prevention, and Doctor Tales, short biographical sketches of health professionals interacting with patients. His short story, The Hero, appeared in the Stanford literary journal Tangents last year. He and his wife Sue are longtime residents of Portola Valley.