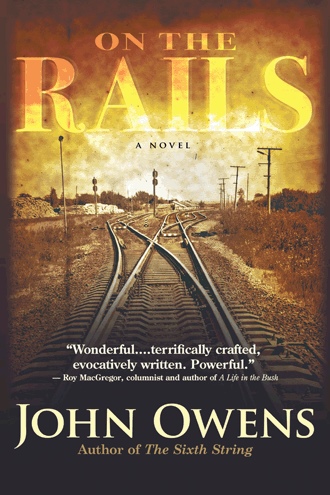 Set against the harsh backdrop of the Great Depression, On the Rails traces the journey of Michael Shymchuk (later Shutt), a boy from the Canadian prairies who escapes a bitter family life and a failing farm to ride the train rails, crossing the country and the paths of a memorable cast of characters. Fleeing poverty and abandoning perhaps the love of his life, Michael enlists in the legendary Royal Canadian Mounted Police, where he comes face to face with bootleggers, bandits, whores, murderers, and, ultimately, all the evil men do. Finally, in the unforgiving Canadian Arctic, among the Inuit, the missionaries, and the mercenaries, Michael's body and spirit are severely tested as he deals with the brutal environment, another man’s insanity, and the haunting discovery of a nineteenth-century English expedition. Death comes close, and he faces an intense day of reckoning with all that he believes. Tracing one young man’s journey into manhood and self-knowledge, On the Rails is an adventure, a bittersweet love story, and an epic tale of sin, redemption, and the agonizing choices that confront us all.

John Owens was born in England and raised in Ottawa, Canada. He is the author of The Sixth String and more than thirty short stories and essays. He is also a marketing consultant and writer. Owens is married and lives near Ottawa. Visit him online at www.johnowens.ca.