The Execution of Nicola Sacco and Bartolomeo Vanzetti 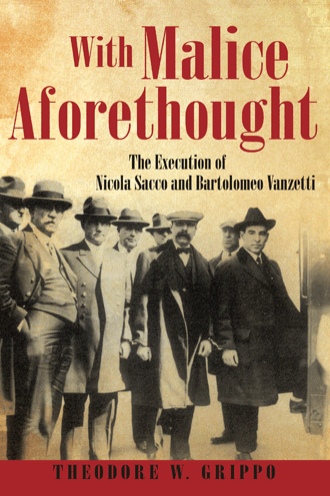 On Sunday, the final line of sympathizers formed outside of Langone’s at 6:00 AM. It took four hours to reach the caskets. At 2:30 PM, a lead car and two hearses, each carrying a casket, left Langone’s. Cars overflowing with flowers followed the hearses. Two limousines were next, one with Sacco and Vanzetti family members and the other with members of the defense committee. Behind the last limousine, thousands of mourners trailed on foot, eight abreast, with arms linked. Over one hundred thousand people viewed the bodies, and an additional two hundred fifty thousand to a million lined the streets as the cortege moved through Boston for the eight-mile trip to the crematory at Forest Hills Cemetery. The mourners strode defiantly amidst a falling rain that likened the streets to a valley of tears. They called it “the march of sorrows.” It was a funeral of regal dimensions, but it had a dark side. There were five hundred police on foot, seventy mounted officers, and many more in cars and motorcycles, all armed with guns and batons. The city dug up streets and set up barricades and roadblocks so the procession could not pass the Massachusetts State House. The police forbade a musical band and the display of any placards or signs. Thousands of mourners began their procession with armbands hidden in their pockets. When they were near Scolly Square, on a signal they put them on, and a virtual sea of “Justice Crucified” in black letters against a red background burst onto the scene. The police then became openly hostile. The mounted officers repeatedly charged directly into the marchers and sympathetic bystanders, some of whom were pushed through plateglass storefronts in the crush. Police battered defiant mourners with their batons, and officers with drawn guns kicked and beat the marchers who had fallen. As the remnants of the marchers approached Forest Hills Cemetery, they passed through an Irish enclave. They were jeered by hostile faces appearing in the windows and doorways of the flats and walk-ups lining the streets, with shouts of “guineas, wops, dagoes go home.” When the caskets reached the crematory, thousands of rain-drenched followers surrounded the small chapel, which could hold only one hundred mourners. Mary Donovan read a eulogy over their caskets: You, Sacco and Vanzetti are the victims of the crassest plutocracy the world has known since ancient Rome—and now Massachusetts and America have killed you—murdered you because you were Italian anarchists—In your martyrdom we will fight on and conquer. A thin line of smoke arose from the crematorium, sending a message that the spirit, the memory, and the ashes were all that remained of Nicola Sacco and Bartolomeo Vanzetti. It was over!

On April 15, 1920, five bandits robbed and killed a paymaster and his guard in a Boston suburb. The police charged Nicola Sacco and Bartolomeo Vanzetti with the crime. They were local immigrant workers associated with a detested anarchist group. A year later, a jury convicted Sacco and Vanzetti of murder during a period of anti-communist hysteria in America. They were executed after six years of failed appeals, despite proven misconduct by prosecutors and the judge and a confessed participant in the crime who swore that the two Italians were not involved. Worldwide protests erupted. Millions claimed the two were framed and executed for their political beliefs. Author Ted Grippo takes the reader through the trial, disclosing and examining new documents and other recently discovered evidence supporting a conspiracy to frame Sacco and Vanzetti. While the debate over their guilt may continue for some, With Malice Aforethought will end the argument for many.

* * * *
“A comprehensive history of shocking abuses of the criminal justice system that resulted in the conviction and execution of Sacco and Vanzetti.” —Greg Jones, former First Assistant US Attorney “An important story revealing the treatment of Italian immigrants in 1920s America.” —Bill Dal Cerro, President, Italic Institute of America.

Ted Grippo is a retired Chicago lawyer with over fifty years experience in law enforcement and private practice. He has been active in promoting Italian American cultural and civic activities for many years. Ted and his wife, Marlene, spend weekends with family and friends at their summer home in Fontana, Wisconsin.