In the Shadows of the Gods

The Rise of the Guard 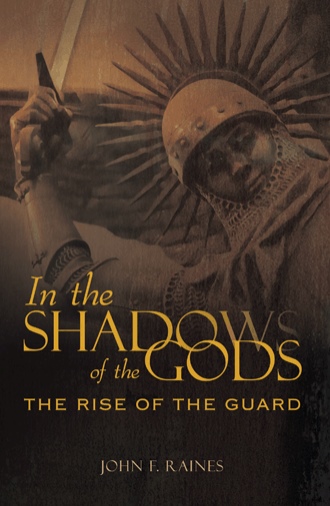 It is a troubling time in the Kingdom of Shale.

As a marauding group calling themselves the Rogues begins launching raids across the kingdom, a small group of hybrid warriors intertwined magically with mythical beasts swears to defend the kingdom. When a hooded prowler breaches castle security and escapes into the night, the Royal Guard splits in two—one group pursues the oddly powerful intruder, while the other chafes at being left behind.

The powerful stranger is on a ruthless search for just one thing—the Relic Sword—and he’ll stop at nothing to get it. After he leaves the Royal Guard with nothing but destruction, unanswered questions, and a taste for revenge, the King’s soldiers begin a dangerous journey to fi nd the supposed assassin before he unleashes a legendary power on the world. But as they search, the lines between friend and foe begin to blur, and the allegiance of some becomes questionable.

As swords clash and arrows soar through the air, no one knows who to trust; but everyone is about to learn that the Relic Sword has the capability to change the future of the Kingdom of Shale forever.

John F. Raines grew up on the Oregon Coast before moving with his family to the Central Valley of California. He began writing when he was thirteen, finished his first novel at nineteen, and is currently working toward earning a master’s degree in fi ne arts for writing. He currently lives in Santa Cruz, California.