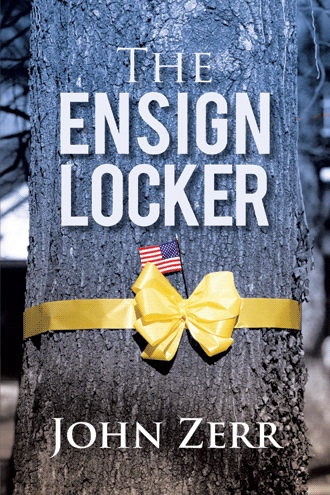 I had thought the GQ alarm was the most effective wake-up device in the universe, but I was wrong. A grenade going off ten meters away is better. I was sleeping on Sandy’s poncho when the grenade exploded. Then I heard Sandy’s carbine popping on semi-automatic behind me. I fumbled a bit before finding my M-14. Then I noticed the popping had stopped but there was a lot of automatic fire coming from the south side of the hill. I crawled to Sandy, and he was just laying there. I stood up and saw muzzle flashes, three or four of them to my left, and one from my right. To the right had to be Sergeant Evans. I clicked off the safety and started firing at the muzzle flashes. When my magazine was empty, I bent down to get Sandy’s carbine, and amid the zips and zicks of bullets over my head, and bits of chewed up brush raining on me, I heard Sergeant Evans. “Get down, you dumb-assed squid.” I fired two rounds, and then the carbine was empty. I ducked down and reloaded the M-14. When I stood up again, Sergeant Evans was firing again and two sets of muzzle flashes were talking back to him. I fired my whole clip at the flashes; then it got quiet. “Sarge?” I half whispered, half shouted, I didn’t know quite what to do. He coughed. “Check on Talbot, will you, sir?” “You okay, Sarge?” “Jesus Christ, ensign. Check on Talbot. Now, do it.” I stumbled through the brush to Talbot’s position. He was slumped over onto his face. I had my M-14 in my right hand, and I rolled Talbot over. Most of the right side of his face was a mess and blood was all over the front of him. I wiped the blood off my left hand, checked that my safety was off, and I inched down the hill, kind of ducked over a bit, to see what was with the VC. After one step away from Talbot I heard moaning and I fired what I thought was about half a clip at the sound. It was quiet for a mid-watch moment, then I heard a noise in the brush and I fired at the sound until I was empty. As I reloaded, it hit me. Company C. That’s who they are after. I flicked on my flashlight and hurried forward. I had to make sure the VC were not going to make any more trouble for us. “Jesus, turn off the damned light.” I didn’t listen to him. I found two VC pretty quickly. They looked like they were dead, but I put two more rounds into the head of each. It took me longer than I wanted, but I found six all together and they all got the two-round Jon Zachery personal life insurance policy. I went back to Sergeant Evans. “Sarge, we’ve got to get to the OP. I’m sure the VC are going to attack the Company. Can you walk?” I heard him grunt. “Sorry, sir.” “Okay, I’m going to drag you. I don’t have to tell you to hang onto your weapon, do I?” “Wise-assed ensign.” “Okay, so hang onto mine, too.” I grabbed his flak jacket and started backing up to the OP. I was pretty winded when we got there, but I used my flashlight again. He’d been hit in the leg and in the shoulder. I grabbed the rucksack beside the radios and dug out the first aid stuff. “Bandage your leg, then hold another on your shoulder. Can you do that and watch for more bad guys?” “I got it, sir.” I sat on Sandy’s poncho, placed the chart on my knee, shined the flashlight on it; and then I called Manfred and asked for illumination rounds. The Ops O was the Evaluator in Combat, and he wanted to go to GQ. I wanted to scream at him. No god damn time for no god damn GQ. But I knew it was important to sound calm. I took a breath and let it out. I had to prod the Ops O once for the illumination, but, finally, the two shells popped. The light they threw off was a bit on the weird side, but it was effective. I got the binoculars. “Oh, Jesus.” “What is it?” Sergeant Evans asked. “There’s a potload of them, Sarge.”

In 1966, the destroyer USS Manfred is bound for Vietnam. For junior ensign Jon Zachery, life is simple. He wants the American dream for his wife and for himself, and the navy is just the first step along the way. After the ship enters the combat zone, however, Zachery lands in hot water with his superior officers. At the same time, he begins to have troubles with his wife. He finds himself in challenging combat situations with the North Vietnamese and Viet Cong, but he is most distressed when he discovers that one of his roommates is rabidly anti-war. Following two months in the combat zone, the ship gets a new commanding officer—and a new set of problems face Zachery and his shipmates. At first, his new commanding officer distrusts only the five ensigns in the ensign locker, but eventually he begins to distrust the entire wardroom. What happens next has a huge affect on the entire crew—ultimately resulting in the ship returning home to San Diego. Now Zachery must face the anti-war sentiments at home, and it may be the last straw for him.

John Zerr served thirty-six years in the navy. Between 1966 and 1972, he completed three deployments to Vietnam—one aboard a destroyer and two aboard an aircraft carrier from which he flew 330 combat missions. He and his wife, Karen, reside in Missouri.