The Lifelong Love Story of Alexander the Great and Hephastian, son of Amyntor 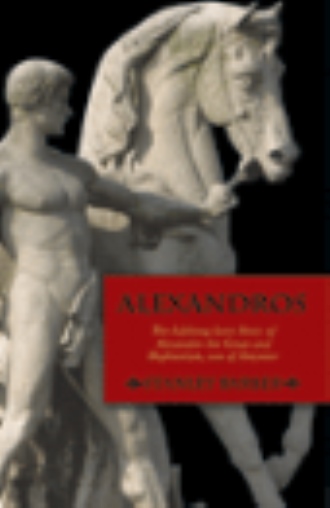 from the essay: "Alexander and his Homosexuality" Those who want to cling, less than heroically, To the fantasia That two men in the sexual peak of their lives, Who lived, slept, and fought in constant company of each other For twenty years, Neither of whom had any lasting Romantic relationship with women, Did not fuck each other— Well, then, dream on. And what difference could it make? Friends, companions, lovers, brothers— They were probably all this And more to each other, As much as history allows us to know. It doesn’t diminish that Alexander Was and remains One of the most remarkable and breathtaking heroes, Legends, generals, kings, and— If you believe what his mother told him— Gods of history. I cannot imagine Mary of Nazareth Whispering conspiratorially to her child, “You are the son of God.” But Olympias did, and often, And perhaps, eventually, Alexander believed it, too. Or may I conjecture that it was The very loyalty and passion of Hephastian Amyntor That kept Alexander (Despite his alleged megalomania) Clear and true To his mission to unite the world. from ALEXANDROS, the Libretto, ACT ll "I Dreamed One World" ALEXANDROS: I spread my eagle wings, To the heavens I would soar. The wingspan of my arms Reached to every foreign shore. With Bucephalus beneath me, Hephastian at my side— With the armies of the world, My armies would collide. I marched across the world, With the blessing of the gods— I fought a hundred wars, Won them all against all odds. You think it was for glory That I lived a life of war. Now I will tell you what I dreamed my life was for— I dreamed One world— One day the wars would cease. I dreamed when life was done, I would leave the world at peace. ZEUS: Did you dare to dream That peace you could attain, By rampaging across the Earth Like a beast that’d gone insane? A GOD: You left mountains of bodies Rotting in the mud. POSIEDON: You flooded the world wide In an ocean full of blood. A GOD: You turned the Earth Into a world at war. GODS: And now you must answer— What was the killing for? Your banners of tyranny On every land unfurled. Is this how you dreamed To bring peace to the world? ALEXANDROS: (simply and sadly) Yes— I dreamed One world.

Written as a libretto for a sung through musical, (a la LES MISERABLES), with precise, accessible and often poetic language, the reader can share in the intimate conversations of people who may appear untouchable and unknowable in the famous paintings, sculptures and histories that have attempted to capture their likeness.

For more than 2,300 years, historians, biographers, novelists, and, more recently, filmmakers have relegated Alexander the Great’s lifelong love affair with Hephastian to either a historical footnote or, apologetically, his “possibly” being a bisexual who dabbled occasionally in male-to-male love.

ALEXANDROS positions this enduring and passionate twenty year love story at the very center of Alexander’s life. It follows this almost superhuman man, seemingly blessed and guided by the gods, and his constant companion, Hephastian, from their school days in Macedonia where they first fall in love to the far reaches of the known world. Then finally, after dying within months of each other, we follow them into judgment before the ancient deities and ascension into the pantheon of gods and heroes.

ALEXANDROS also contains four essays written by the author that explore the childhood pain and sexual passions that drove Alexander the Great to become at once the most detested and the most adored man who ever lived.

STANLEY BARBER has directed and/or produced nearly 500 major theatre productions in a career spanning more than 40 years, ranging in diversity from JESUS CHRIST SUPERSTAR to RENT, including major productions of AMADEUS, A CHORUS LINE, EQUUS, INTO THE WOODS and A MAN FOR ALL SEASONS.

He has written the book and/or lyrics for a dozen musicals which he also directed, including versions of PHANTOM OF THE OPERA, St. Exupery’s THE LITTLE PRINCE, Kipling’s THE JUNGLE BOOK and THE WIZARD OF OZ; and a dramatic adaptation of Oscar Wilde’s THE PICTURE OF DORIAN GRAY.

His work off-Broadway includes directing his librettos for two musicals, as well as his direction of HAMLET and most recently, OEDIPUS THE KING.

A former high school and college English teacher, Stan Barber is the founder and director of Castle Shakespeare Repertory Company, a professional actors company, and Pax Amicus Castle Theatre, both located in northwest New Jersey, where he resides.