Cobble Brothers to Card-Monroe: The Story of the Men Who Revolutionized the Carpet Industry 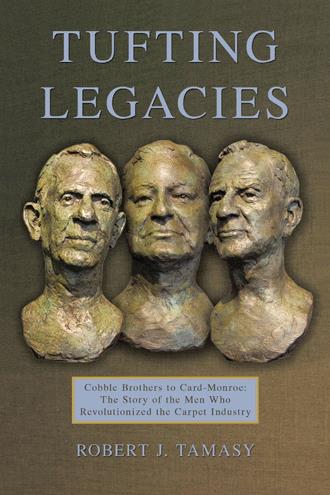 Think of the last time you walked barefoot or in stocking feet across a plush, cut-pile carpet, or stepped into a room and admired the subtle tones and patterns of a cut-loop “sculptured shag” carpet. Did you take time to consider the trailblazers whose imagination, initiative and inventiveness helped make possible such versatile and diverse floor coverings? Except for those directly involved in the carpet business, few people ever do. We all, however, appreciate the end result. A number of books have been written to document the history of the carpet industry from an overall perspective, and some have served as helpful resources in preparing to write this book. However, they concentrate primarily on the companies and enterprising individuals that helped to advance the manufacturing and retail aspects of the business. Comparatively little focus has been given to the innovators that one small, incremental step at a time assembled, adapted, modified and refined tufting machines into the fast, efficient instruments of mass production that they have become. The unlikely journey from the first crude, hand-tufted bedspread at the dawn of the 20th century to the multicolored, patterned, varied textured pile carpets of today almost seems like the figment of someone’s fanciful imagination. One might be tempted to dismiss it, concluding “you can’t get there from here” – except it’s true. Starting in the 1930s, men bearing the last names of Cobble and Card – with the assistance and support of many individuals along the way – slowly and systematically pursued dreams that first seemed unreachable, then improbable, until they started to seem possible, then probable, and finally, attainable. To these gifted and ingenious individuals we owe a tremendous debt every time we set foot on carpet in a home, an office, or a store. Beyond that, their curiosity, vision and innovation have had an immeasurable impact on a region that has been greatly enriched by the carpet industry, as well as socioeconomics and everyday lifestyles across the United States and, increasingly, around the world. This book is, in part, an attempt to direct much-deserved attention to the lives and unique contributions of six special individuals: Albert and Joe Cobble, who laid the groundwork; Lewis and Roy Card, who experimented, guided and perfected the work; and finally, Lewis Card Jr. and Charles Monroe, son and son-in-law, respectively, who are among those continuing the work today. Without question, hundreds of people have made their own notable contributions to the development of the carpet industry over the past 50 years or so. Some assisted in exploring and developing the intricate technology that helped to make tufting machines the marvels they are now. Others applied the capabilities of that machinery to extend the limits of carpet design and quality. Some will be acknowledged in the chapters that follow, although even attempting to mention every individual would be impossible. These pages, however, are reserved primarily for celebrating the special place the Cobble and Card families hold in the carpet industry’s colorful evolution.

Although dating back to Egyptian antiquity, carpet as we know it is relatively new. Prior to the 1950s, the means for making carpet was expensive and time-consuming, unaffordable for most homeowners.

During the ‘50s, tufting – a process previously used to create bedspreads, bathrobes and throw rugs – was adapted for carpet manufacture. Over succeeding decades, machines advanced dramatically in speed, efficiency and patterning capabilities.

Tufting Legacies recounts the history of the tufting machine industry, as well as legacies forged by the hard work, diligence and determination of true pioneers – Joe Cobble, Lewis Card, Sr., and Roy Card – who viewed problems and obstacles as opportunities to achieve the inconceivable.

Those humble beginnings helped motivate these young men as they honed their skills in making machine parts and later applying that expertise to build tufting machines.

If someone in 1950 had asked Lewis and Roy about how to develop those into the huge, computer-controlled machines used worldwide throughout the carpet industry today, they might have responded, “You can’t get there from here.”

But they did get there, one small step, one giant step, one minor modification, one major breakthrough at a time. Tufting Legacies tells how it happened.

Robert J. Tamasy is vice president of communications for Leaders Legacy, Inc., based in Atlanta, Georgia, which serves business and professional leaders through executive coaching and mentoring. A veteran journalist and former community newspaper editor, Bob has written and co-authored numerous books and hundreds of magazine articles, specializing in business and workplace topics. He and his wife live in Chattanooga, Tennessee.