What I Want My Adopted Child to Know 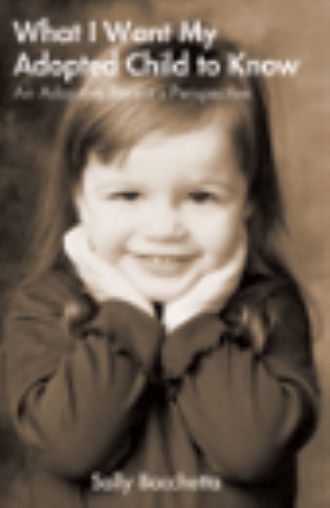 I don't know anyone who dreamed of growing up, getting married, and not being able to have children. I certainly didn't. I assumed that when (if) I decided to have children, one of my perfectly ripe eggs would let her guard down for the most athletic of a throng of swimming suitors, and I would simply get pregnant as women in my family have done for generations. I would have children the regular way, if I decided to have them at all.

I didn't think about adoption much, and when I did it was as a really nice, slightly exotic thing to do. A really nice, slightly exotic thing for other people to do. Older couples who never had children, or people who wear sandals year-round and quit their jobs to become missionaries, or families who fix up old Victorian mansions and seem to collect assorted “children with special needs” or kids from “broken homes.” Adoption was something those people did; not me. Why would I?

I peed on a forest worth of tiny test strips before I started to think that maybe “it” wasn't going to happen; not without some help, anyway. So I climbed into the stirrups. I consulted the experts. All of my once-private entrances and exits were transversed, transmographed, radiographed, photographed, sanitized, anesthetized, magnified, pulled and pried, palpated, saturated, dilated, inseminated, and evaluated in a series of attempts to get pregnant.

I never realized my own quiet biases about adoption until it became intensely personal. I was angry. I was petulant. I was wounded. And I was painfully surprised to find that I was a snob. It turned out that deep within my most private Self I thought of adoption as a default, a less than, a last resort for people who were out of options. People who had failed to produce their own children. People who couldn't make a family the regular way. People who were desperate or broken. People like me. I didn't want to be people like me.

I resented having to consider adoption. I resented my body for betraying me. I disparaged pregnant teenagers for doing in the back seat what I couldn't do in the sanctity of my marriage. I cried and raged and judged and fumed and after a long while, I accepted. I accepted that things happen the way they happen. I accepted myself and my situation. I accepted that it wasn't really my situation at all, it was ours, your father's and mine. I accepted his perspective and his feelings and his help, and eventually I accepted adoption as legitimate a way as any other of becoming a parent. I began to embrace adoption as the right way for me to become a mother. I grew to cherish the idea and even feel special. Adoption emerged as something self-evident and fulfilling and romantic. I fell in love with the idea of adoption and I began to bond with my child-to-be-adopted-later.

I thought that coming to terms with the idea of adoption would be the most difficult part of the process. Was I ever wrong! The time I spent deciding to adopt was a walk in the park compared to actually doing it. It turns out that adoption is a tremendous hassle. It's intrusive and time-consuming and expensive. Again and again we had to convince strangers that we were fit to parent, while every day brought another story of parents leaving their babies alone in the car or serving alcohol to underage teens. We got fingerprinted and evaluated, looked over and passed up. We gave strangers access to our financial records and our bedroom closets, knowing full well that plenty of biological parents were cruising along with stale batteries in their smoke detectors, pot handles facing out, and wall outlets uncovered.

When you decide to adopt you open your heart to disappointments and near-misses that bring you to your knees. Many times I inched to the very edge of conclusion. Many times I thought, “I'm done. I want out. This is costing me too much of myself.” I finally realized that in those moments when I was closest to surrender I was also closest to peace, and I knew I was ready for you. I knew then that I was ready to be your mother because I had released my ideal. I had chosen the reality of my motherhood over the dreams of my childhood, and I understood that there was no other way for us to come together.

When I finally held you in my arms, I knew in my heart that I would have waited a hundred years for you. Exactly you. And I would do it all again.

Bacchetta wrote the book in response to a need common among adoptive families. “Adoptive families navigate emotional terrain that fully-biological families don’t have to. This is a book adoptive parents can give to their child and say, ‘I know adoption is painful, unsettling, joyous, and affirming. It’s that way for me too. More than anything, adoption is the way we came together, and I’ll always be grateful for that.’”

Bacchetta’s words echo with the collective voice of over 100 adoptive parents interviewed for this book. With chapters like “I Would Do it All Again”, “You Are Not Different Because You Were Adopted,” and “I Regret What I Can’t Give You,” What I Want My Adopted Child to Know is by turns affirming, challenging, thoughtful, wistful, and poignant.

Sally Bacchetta is an award-winning writer and sales training consultant with more than a decade of experience in medical writing, magazine journalism, and corporate communications. She draws on her educational and professional background in psychology and counseling to illuminate the private thoughts of adoptive parents with sensitivity and startling honesty. Sally is the Rochester Adoptive Families Examiner and her articles have appeared in national and local publications including Genesee Valley Parent magazine. For more information or to book Sally for an interview or speaking engagement visit http://www.TheAdoptiveParent.com.