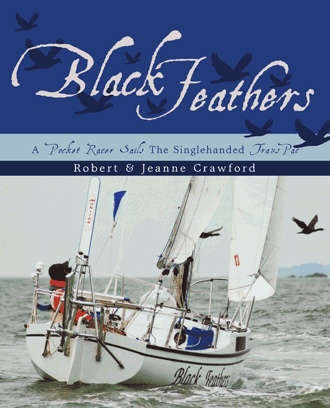 Robert Crawford...raced the 2008 Singlehanded TransPacific Yacht Race aboard Black Feathers, his 1961 Cal 20, finishing in 19 days 21 hours...making Black Feathers the smallest boat to have finished the race...Crawford followed the 1990’s mantra of the Singlehanded Sailing Society, of which he is a member: “Do the race in the boat you have.” Talk about a small-boat adventure!

Follow the evolution of Black Feathers from a stock 1961 Cal 20 sailboat into an effective pocket racer. Go with her and her skipper as they sail solo from San Francisco to beautiful Hanalei Bay, Kauai in the 2008 Singlehanded TransPac. Imagine sailing 2200 miles across the Pacific Ocean in a 20-foot sailboat—ALONE with NO ENGINE! YOU can be there.

Black FeathersInspires Us to Keep Our Dreams Alive. Experience One Man’s Efforts for the Common Sailor

An avid singlehanded sailor for nearly 20 years, ROBERT CRAWFORD, a veteran of four trans Pacific crossings, shares his 2008 Singhlehanded TransPac adventure. Having prepared two boats for the Singlehanded TransPac races, he relates his experience in a basic, straightforward style. Respectful of larger, technologically advanced boats, he expresses a particular enthusiasm for the smaller boats and their unique personalities and challenges. Hoping to prove this prestigious race remains an attainable dream for the common man in a common boat, Robert’s story invites you along as he prepares and sails his tiny vessel alone, with no engine, the 2200 miles from San Francisco to beautiful Hanalei Bay in Hawaii. Witness this evolution in over 60 photos and diagrams. And in case you are inclined to undertake a similar experience, he offers a manual outlining the equipment and procedures used to transform his 20-foot daysailer into an offshore TransPac-ready pocket racer. His 1961 Cal 20, Black Feathers, is the smallest boat to ever complete the Singlehanded TransPac Race. Robert, a retired dentist, from the San Francisco Bay Area now lives with his wife, Jeanne, in the mountains near Yosemite. Black Feathers, berthed in San Francisco, is always anxious for her next adventure. JEANNE CRAWFORD, is NOT a sailor, and never will be. She experienced the TransPac adventure from the support person’s perspective—on dry land. Providing continual support to Robert, as well as event planning expertise to the TransPac Race Committee, Jeanne immersed herself in the race. In doing so, she gained a new family and relates her adventure though a non-sailors’ perspective. Always an ardent writer, she enjoyed weaving the various aspects of this book together. Jeanne retired from Intel Corporation in Folsom, CA in December 2005 after a varied career that included serving as an event coordinator for the Towe Auto Museum, as well as the owner-operator of Navlet’s Flower Shop, both in Sacramento, CA. Now she writes. In addition to co-authoring “Black Feathers—A Pocket Racer Sails The TransPac,” she also wrote “The Kindness of Strangers.”