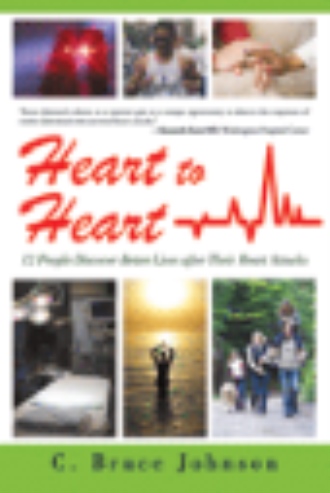 Heart to Heart By C. Bruce Johnson Chapter 1: My Story The pain was intense and unrelenting, and I immediately thought someone had shot me. My hands moved to my chest to put pressure on a hemorrhage that wasn’t there. No blood. No hole in my starched, white dress shirt. I tore open the top buttons and pulled at the tie around my neck to get more air. The pain was somewhere deep in my chest, where I couldn’t get to it. My good friend and cameraman, Mike Fox, was driving. “Damn, turn off the air.” I thought the contrast of the air conditioning in the car with Washington’s summer heat and humidity might be causing the problem. Maybe it was just indigestion from the greasy burger I devoured at yet another lunch on the run. The pain pressed on, like a vise tightening my chest. “Stop the car. Maybe I can walk it off.” The news car pulled over to the curb on Stanton Road in Southeast. I knew the area well. I had done stories inside the elementary school that stood in the middle of the block. Shortly after I moved to D.C. from my first TV job in Cincinnati, I assigned myself to the rough Stanton Dwellings Public Housing project with another cameraman and friend, Mike Murphy. We documented the daily twists and turns in the lives of Stanton Dwellings resident Barbara Price and her children. Walking a few steps didn’t ease the pain in my chest. It hadn’t moved to my arm or anywhere else. I was worried, but not panicked. After all, I was only forty-two, in good shape, a tough street reporter in a tough town that critics like to refer to as “Murder Capital” of the country. I often took my camera crews into neighborhoods where some cops wouldn’t dare go alone. “Mike, get me to a hospital,” I gasped. “Let’s go to GW.” George Washington University Hospital is where President Ronald Reagan was taken when John Hinckley shot him in 1981, and it was on the way back to Channel 9. I was thinking, GW saved the president. It can save me too. They could check me out, and I could still make it to the station and get my story written and edited for the 6 p.m. news. Truth was, I didn’t want to go to the neighborhood health-care facility, Greater Southeast Community Hospital. I had covered stories about horrible conditions there: uninsured patients, inadequate staff. It was a hospital with multimillion-dollar deficits that was unable to keep its accreditation. I feel bad saying it now, but honestly, if this turned out to be serious, I didn’t want them cutting me up at Greater Southeast. The pain wouldn’t let up. Eventually I decided it was time to panic and began to worry that I wasn’t going to make it across the Anacostia River through downtown to GW. Mike had sensed something wasn’t right with me all day long. He said I had been complaining most of the day—“bitchin” is the word he used. He said I seemed preoccupied. The car headed for Suitland Parkway, which would have put us in the direction of GW, still a good fifteen-to-twenty-minute drive away, depending on the late-afternoon traffic. Spotting a firehouse, we both concluded I wasn’t going to make it if we didn’t stop there. The car slammed into the drive on Irving Street. I recall my head being jerked backward. Mike threw the gearshift into park and leaped out in one sudden swoop. He raced toward the red brick building, leaving the driver’s door open and the motor running. “I need some help. I’ve got Bruce Johnson out there, and he’s having a heart attack.” I could hear him shouting at two people in blue uniforms who had probably already seen their share of life-or-death situations. Heart attacks probably run a distant third to assaults and killings in this part of town.

It really doesn’t matter what sparks the sudden Coronary infarction (MI), the medical term for a heart attack. This disease is an equal opportunity killer. Men, women, young, old, rich, poor, famous and people who aren’t known outside of their families and workplaces! Dead is dead and by most accounts the one million people who will have heart attacks this year might have been spared had they made a few lifestyle changes. That’s what the country’s cardiologists are begging for today.

The author interviewed dozens of candidates but he wanted a diverse group of heart attack survivors who represented a cross section of America. He found them and in some cases, they heard about his project and found him. These are their stories of regaining life after a heart attack!

Winner of 19 Emmys and voted in 2003 to the Society of Professional Journalists Hall of Fame, Bruce Johnson has been a reporter and anchor for the CBS affiliated Channel 9 WUSA TV in one of the most watched media markets, Washington, D.C., for thirty years. He has earned a reputation as one of the nation’s best urban-affairs and investigative journalists.