The Power of Trauma 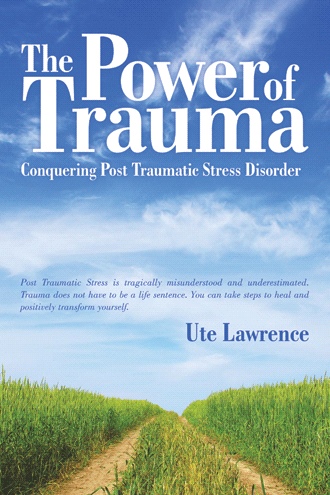 On the Friday before Labor Day in 1999, Ute Lawrence and her husband Stan were headed to a business meeting in Michigan, traveling down one of Canada’s busiest multi-lane highways. They never made it.

They were at ground zero of an eighty-seven-vehicle pile-up, an inferno of heat and flames that would become the worst accident in Canadian history. Dense fog was blamed for the eight deaths and forty-five injuries.

Physically, the couple walked away with just a few scratches. Mentally, Lawrence was changed forever. This is the story of her search for the truth about the changes in her behavior following the accident, her realization that she was suffering from Post Traumatic Stress Disorder (PTSD), and how she’s succeeded in overcoming it.

“I always believed that I could handle everything that came my way, good or bad,” writes Lawrence, who ran a highly successful magazine business for twenty-two years. But she eventually realized that PTSD was something she couldn’t handle on her own. “I was numb. I just sat at my desk, unable to think, let alone concentrate,” she writes. Her search for answers led her to various treatments and programs that helped her “come back and move on.”

She shares these therapies, with the caveat that she is not a medical professional and that the information is based on her own experiences and research.

The therapies include EMDR (“eye movement desensitization and reprocessing”), cognitive behavioral therapy, HeartMath, and positive psychology. She presents information about each; for example, using the HeartMath “tool” of freeze-frame, patients learn to recognize the stressors that lead to anxious symptoms and then try to replace them with more positive feelings.

Additional chapters deal with three other individuals who were suffering after dissimilar traumatic events, the necessity of uncluttering your material life (“a positive move to simplify your life”), and sustaining yourself beyond the event.

A self-assessment checklist for PTSD is included in the back pages. This book may serve as a starting point for readers who are questioning whether they might still be affected by a traumatic event.

Readers will also discover some good life-affirming messages here. Because of her brush with death and the ensuing PTSD, Lawrence founded the first civilian Post Traumatic Stress Disorder Association in North American three years ago. It “provides access to information about PTSD and a referral system found lacking in many areas of medicine.” She’s also a speaker and presents information on the Power of One Discovery series, a program that helps individuals with personal and business growth.

Her ultimate wisdom is this: “What it boils down to is trusting what is right in your life and building on it.”

Post-Traumatic Stress Disorder (PTSD) is usually associated with soldiers in war-time or civilian law enforcement during major disasters (9/11). But PTSD also affects civilians who have experienced major loss, accidents, abuse, or other trauma, and, often, those people don't have access to the same support networks and professionals that exist for the groups traditionally exposed to the events that might trigger PTSD.

In 1999, Ute Lawrence and her husband were caught in a eighty-seven car accident--the worst accident in Canadian history. Trapped in their car, surrounded by, and under, other cars and trucks, the Lawrence's owed their lives to a young girl trapped in the car next to them who was yelling for help. While the girl, her father, and brother died, Ute and her husband escaped their car with the help of a stranger who broke through their windshield and pulled them to safety.

In the aftermath of the accident, Lawrence had repeated bouts of depression, numbness, and distraction. It wasn't until she recognized that she was not just going to "snap out" of her feeling that she began to pursue help and doing her own research into PSTD. She has gathered the lessons and skills she learned to create //The Power of Trauma//, which outlines different forms of therapy that can help people overcome PSTD, such as Cognitive Behavioral Therapy, Eye movement desensitization, and reprocessing and counseling. She also uses other people's examples of life stressors that can lead to PSTD and the skills that were used to overcome them. //The Power of Trauma// is a short book, but contains a wealth of information for helping overcome trauma and stress, a checklist for self-identifying PSTD and reference information for further research or help. For someone dealing with a major negative, life-changing event, //The Power of Trauma// can provide a good first step in overcoming it.

Reviewed by Ross Rojek (Four Stars (out of Five))

On September 3, 1999, Ute Lawrence was involved in a horrific eighty-seven-car highway pile-up, the worst in Canadian history, that saw eight people killed. In The Power of Trauma, she draws on her mind-altering experience to develop a profound new perspective on life that has actually empowered her.

Lawrence was nearly stopped in her tracks after staring death in the face, and her lengthy and successful career as a magazine publisher soon ended as she battled the haunting memories of that tragic day. Her intense struggle with post traumatic stress disorder and the lack of helpful and compassionate guidance and information inspired Lawrence to share her experience, and her powerful healing, with others.

In this candid and illuminating guide, Lawrence details the symptoms of the disorder, the therapies and programs that eventually led her to a more balanced and fulfilling life, and interviews with the professionals who aided her along her journey from a paralyzing experience to a pilgrimage of self-discovery.

The Power of Trauma will help those who suffer from post traumatic stress disorder to better understand and accept their symptoms. Trauma doesn’t have to be a life sentence. This guide will help you take steps to heal and positively transform yourself.

Ute Lawrence enjoyed a successful publishing career for twenty-two years as publisher of London Magazine and Limited Edition Magazine. She is the founder of the Performance Enhancement Centre and a keynote speaker. In 2007, she and her husband established the first Post Traumatic Stress Disorder Association in North America.