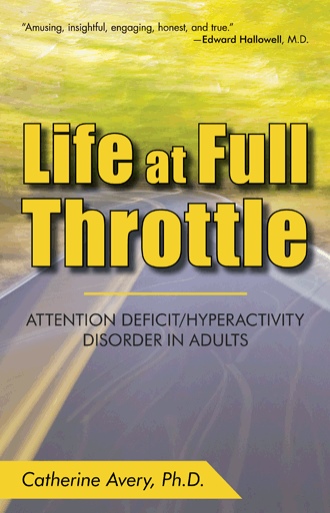 Every AD/HD adult has his or her own story to tell -- some parts are painful, some elicit deep regret or unresolved shame. But there are also “AD/HD moments” that are so common to adults with Attention Deficit/Hyperactivity Disorder, that when viewed with the correct mixture of irreverence and humor, provoke gales of laughter, as well as a sense that those of us with AD/HD may actually have a little more fun in this adventure called Life; that is, if we allow ourselves to. I have always told my children that when I am old and senile -- rocking back and forth on the porch with a toothless grin -- I will be in the process of reliving some of the funnier moments of my life; and believe me, I’ve amassed enough to humor me for years of senility. In this book I will talk about the AD/HD experience from the perspective of one who has evaluated more than 2,000 AD/HD children and adults over the past thirteen years, who is parenting two children with attentional deficits, and who has lived with the symptoms of this disorder for as far back as I can remember. I have no intention of making excuses for adults with AD/HD, but I will also not condemn those of us who repeatedly fall short of our plans and expectations. There is a middle ground that is composed of compassion, experience, education, and humor that I encourage clients with AD/HD to find --and I hope to maintain this perspective throughout my writing. Because humor is so important in the life of an AD/HD adult, I will start with my finest “AD/HD moment” -- when I forgot Santa in the bathroom. And if the particularly observant reader notices that my “AD/HD moment” extended for well over a month, let me just say that time is relative in the AD/HD world. The following story is the truth, the whole truth, and nothing but the truth, so help me God. At least I think it is, although the AD/HD imagination is so fertile, and the tendency for AD/HDers to create stimulation is so second nature, that it is possible that I’ve added a bit here and there as I’ve told this story over the years. Dr. Edward Hallowell, speaking at the first national AD/HD conference for adults , noted that people with AD/HD tend to exaggerate when telling a story, and that they shouldn’t feel guilty for their penchant to embellish for the sake of entertainment (or stimulation). I have taken this gem of wisdom as blanket permission to let go of years of guilt over the fact that I exaggerate from time to time -- particularly if I’m restless…or in a good mood…or in a bad mood…or if I have a particularly engaged audience…or if I’m trying to engage an audience…hmmm, let’s just get back to Santa, okay? It was November -- the beginning of a crazily busy season for those of us who do not plan well, and as PTA president of a local elementary school, I was in charge of organizing a Christmas party to be held immediately after an all-school Christmas concert. Now there are some people who excel at planning large events like this -- first organizing a committee, identifying tasks and delegating responsibility, and then following through to make certain that the various tasks have been completed. These people that I am describing do not have AD/HD. Most people with AD/HD are wonderful at the initial planning stages where imagination and creativity are a plus. But translating ideas into action requires ongoing coordination with others who seem to function best between the hours of 8:00am and 8:00pm. Midnight powwows have not yet caught on in PTA circles, although that’s when many people with AD/HD do their best work. Large projects also typically involve meetings, a word that sends shivers up the spines of my more hyperactive brethren. In the AD/HD world, the word “meeting” is translated as follows: “an indefinite period of forced captivity, during which time one must try to remain focused while simultaneously stifling the overwhelming desire to interrupt, doodle, or pass humorous notes”. The mere prospect of group meetings is often enough to convince AD/HDers that it would be less painful to tackle the entire project by themselves. And initially the idea of “going solo” is met with great enthusiasm and splendid imagery of ultimate success. And memories of disastrous past projects are overshadowed by the excitement of a new venture. So, in true AD/HD form, I decided that there was clearly enough time to plan and execute the party by myself. And to my credit, I had the entire party planned out a month ahead of time…in my mind. I would solicit donations from local businesses and make up darling little Christmas “goodie bags”, one for each elementary school student. The bags would be decorated during art class. The art teacher, of course, would be smitten with this idea, and the final products would be filled with the donated holiday treats and set out on a large table by the entrance to the cafeteria. I had run over this scenario countless times in my mind -- imagining little children pulling their parents by the arm -- “Come on Mommy and Daddy! You have to see the bag that I decorated all by myself!” We would have a group of parents bring in homemade desserts, and to top it all off, Santa would arrive in full costume, with a burlap bag filled with candy canes. The next thing I knew, the concert was a week away and the series of events that transpired will be only too familiar to those readers with organizational deficiencies. At the risk of precipitating a Post-Traumatic Stress response in my AD/HD comrades, let me share with you the following sequence of events, which began with a great plan and ended with an abandoned Santa Claus. As my husband would say: “What were you thinking??” Do you really want to know? Welcome to the AD/HD world…..

Life at Full Throttle transports the reader into the unpredictable world of the AD/HD adult in a manner that is highly engaging, while providing insightful and well-researched information on this topic. As a clinical psychologist, Dr. Avery has evaluated over two thousand individuals for AD/HD, and has developed a well-grounded understanding of the type of information that is most helpful to AD/HD adults, as well as a style of delivery that is well received and appreciated by AD/ HD clients and their families. Having lived with this condition her entire life, and being a mother who has parented two children with attention deficits, Dr. Avery speaks of AD/HD with both insight and humor.

Dr. Catherine Avery received her Ph.D. in Clinical Psychology from the Illinois Institute of Technology. Over the past twenty years she has specialized in the assessment of AD/HD, learning disabilities, and mood disorders in children and adults. She currently resides in Sioux Falls, South Dakota, with her husband and four children.