Echo of a Dream

Book One in the Choosing Love Series 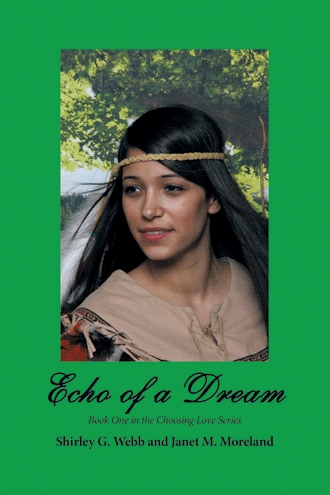 “Webb and Moreland have sculpted a love story so enchanting that readers will find an escape to their own dreams in the artistry.”


Kaitlyn Rose Johnson has made her choice—to become a prima ballerina. She needs only her satin ballet slippers as she strives to rise to the top of her profession. However, while struggling to reach this goal, she made one mistake and possesses one secret. Refocused, Kaitlyn refuses to look back. She is more determined than ever to devote herself to the ballet.


Adrian Ashley, descended from British royal blood, successfully stays at the top of the financial world until his personal life becomes entangled in a fantasy dream that haunts him each and every day. Adrian’s focus changes when he meets the woman who has starred in his dreams, and that woman is Kaitlyn Rose Johnson.


Although Kaitlyn feels an attraction to Adrian, she refuses to give up her ballet career for love, and she harbors a damaging secret. If their love is to persevere and Adrian’s dream is to come true, they must overcome a host of conflicts and obstacles.

Shirley G. Webb and Janet M. Moreland have been writing and publishing romance novels for young adults and women since 2002 when they met online. They are also the authors of the three books in “The Howell Women Saga.” Webb lives in Connecticut and Moreland resides in Nevada.