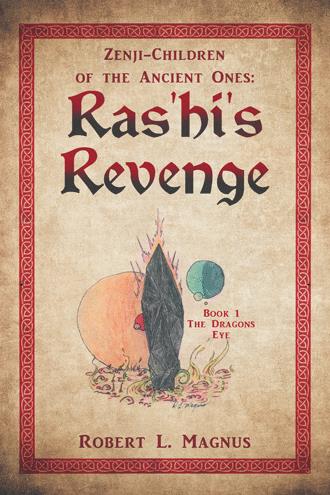 The air within the chamber suddenly crackled with energy as the Black Crystal began to vibrate, shaking the sanctuary to its core, clogging the air with clouds of dusty mortar. Louder and faster, the energy bounced around the room while Ras’hi stood, transfixed before the Black Crystal. Her long golden hair fanned out around her head and a bright, wavering red aura surrounded her body. Then, as suddenly as it had begun, everything became still. The air hung heavy with the stink of sulfur and sage. The Black Crystal returned to its benign beauty, its purple rays fading to nothingness. Ras’hi stood motionless, her body coated in sweat. She watched the Crystal in anticipation. Suddenly her eyes widened with excitement as she saw a small black spot appear on its surface. It grew larger with each passing second until the Crystal was entirely devoured by darkness. Then came a blinding flash of light! A tiny creature, glowing with the brilliance of a setting sunset and surrounded in a fluctuating field of sizzling green energy, flew out from the center of the Black Crystal and hovered in the air just inches in front of Ras’hi’s face. Immediately filling the alcove with its high pitched, warbling cries, the creature began to slow the fluttering of its silken wings and circled downward to the floor. Then, with barely a pause, the energy field began to dissipate and the glow of the tiny creature vanished. Moments later it began to grow and within seconds it had become a gigantic, three-headed dragon. Roaring angrily, its three triangular heads, each adorned with long, twisting black horns and a double row of foot-high, fish-like fins that gradually diminished into nothingness where it’s thin, razor-sharp tail began, whipped around on three, long, slender necks, looking for the one who had dared to call it forth. Bright orange lights flashed with the intensity of a lightning storm from each pair of eyes in both outer heads, but its middle head cradled only one eye, clear and shiny as a mirror. In its reflection was the unabashed amazement on the Zenji Ras’hi’s face as she watched the mighty form fill her ancient chamber. Glaring menacingly, its middle head mere inches from her face, the great jaws parted, revealing two complete sets of green spiked teeth that glistened like polished gems. Its forked, purple tongue flicked threateningly, dripping with thick saliva. Roaring loudly, its scaled skin glistened in the torchlight as it spread its large silky wings and fanned the air. Instantly extinguishing the torches, the huge chamber was cast into near darkness, lit only by the glowing Crystal and the dragon’s eyes. Then it folded its wings, stared angrily at Ras’hi, and became deathly still. Smiling, Ras’hi stood there, unafraid and victorious, for though this terrifying creature could easily destroy her, she now wore her new headband that promised her complete control over this mighty beast.

Befriended by the mysterious Zenji who could control the very elements of nature and space, and made living on the planet Tarr possible, Kyrell Ortrok had read every story he could find about the 300-year war that had been started by one of their own. Holding command over 30 three-headed dragons known as ShinDarKynon, Xan’thix had nearly killed them all before finally being defeated and sent into the Great Void. As for mankind however, his warring ways continued, until the children of the Ancient Ones could no longer stand by without trying to help. Leaving their sanctuaries, they gradually befriended the people and became mediators to the different rulers and eventually established the Tournament of Peace. But in the dreaded Swamps of Antor, Xan’thix last living heir, Ras’hi, wanted only revenge. Able to command fire and stone, her powers were great, but she alone was not enough. But then, just when she might have given up, she learned of a legendary jewel known as the Dragon’s Eye. By itself it was nothing more than a sparkling green jewel, but when prepared and placed above a specially designed Pit of Souls, it would make her the most powerful being on Tarr. Unaware of such plans for revenge and conquest however, neither Kyrell Ortrok who, along with his friend, Oryan De Hovak, had just arrived in the seaport of Alona for the next great Tournament, had any way of knowing that the very fate of their world would soon rest in their hands.

Biography - Having loved fantasy all my life, I’ve always been fascinated with dragons and magic and have been writing short stories since a young child. I was born and raised in Wisconsin and spent almost 4 years in the Navy. I have 3 children. I’ve been happily married since 1974 to the love of my life and currently live in Arlington, Texas.