The Fables of Boris 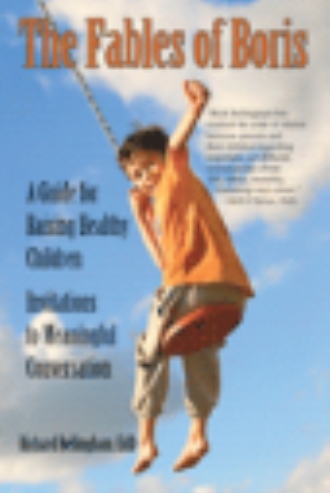 Boris Finds a Wise Friend After two weeks in his new home, Boris decided it was time to venture into the mysterious woods on his own. Liam and Aidan had taken him on walks to show him around the neighborhood, but they never took him into the woods. Although anxious to explore the wild unknown, he had been waiting to find the courage to blindly set forth. He was not sure where his path might lead or what he might find along the way. Trembling, as Boris inched his way onto the path, he began to feel overwhelmed by the large trees that surrounded him, particularly as he made his way further and further from the safety of his home. Birch, maple, pine, and poplars all grew randomly in a wild tangle of leaves, limbs, and underbrush eerily creaking, swaying, and making strange noises. Boris started gaining confidence as he continued shakily, but steadily, down the trail. Even though his body felt tense and tingly in anticipation of what surprises or horrors he might find, he was calmed by the comforting canopy the presence of the trees provided and by the patterning of the shafts of light that streamed through the trees, breaking up the darkness of the woods. Suddenly, a squirrel darted in front of him, scrambled up a tree, and seemed to chatter right at Boris from a branch that was high out of his reach. This was Boris’s first squirrel sighting, and he stared, fascinated by its quick, sharp movements and scolding voice. Then a flock of birds swooped through the woods and Boris felt like they were dive bombing him. His confidence began to slip. He noticed that his tail was hanging between his legs and his ears were flat against his head. He was stopped, uncharacteristically motionless. Boris summoned up his courage and proceeded down the trail. Soon, to his surprise, a bright space emerged out of the darkness of the forest path. He found an open clearing with a sparkling, fresh, clear stream and a make-shift bridge above it. Boris crossed over the stream and pushed ahead. He found that the trail had twists and turns at every juncture. There were hills to climb, logs to jump over (or slide under), brush to avoid, and sharp turns to navigate. Trusting his instincts as a dog, Boris wasn’t too worried about getting lost, but he was still in suspense about what might lie ahead. After what seemed like hours (but was actually only 15 minutes), Boris came to a remote beaver pond tucked into the forest. He was fascinated by the bustling activities of the beavers, who had cut down whole trees with their teeth and built a home for themselves in the pond. The pond was full of trees that served as nesting points and perching spots to all kinds of colorful birds: Boris spotted ducks, swallows, and an eagle sitting regally atop one of the trees. A strange voice startled Boris and made him jump. His eyes widened as he tried in vain to locate the source. To his relief, a kind-looking dog appeared from the shadows and introduced herself. “I’m Zelda” she said. “I live on the other side of the pond. I’ve never seen you in this neck of the woods. You must be new. Welcome.” Boris relaxed. Zelda had a calming influence on him. Boris knew immediately that Zelda was special. He looked forward to getting to know her. He noticed that his tail had started wagging and that his ears were no longer glued to his head. Though they had only just met, Boris learned a lot about Zelda that day. She was an intriguing dog because, unlike the other dogs he had met, Zelda didn’t identify with any particular breed. She was a little bit of a lot of breeds. And she didn’t mind being different or particularly unidentifiable as a type. Even in a short amount of time, Boris found that he admired Zelda because she loved to think. Talking to Zelda gave Boris a sense of freedom he hadn’t experienced before. Zelda had the unique ability to stay calm, be present, and be respectful of Boris’s obvious youth and inexperience. At one level, Boris found the conversation confusing because Zelda sat so still, gave very few reactions (like wiggling, barking, perking up her ears –all the things Boris did constantly) and yet seemed to listen intently to everything Boris said. One another level, Boris felt peaceful being with Zelda because she seemed so content to sit quietly, and didn’t find it necessary to run frantically from one activity to another like Boris often did. After talking to Zelda for what seemed like minutes (it was actually 2 hours), Boris felt his stomach growl and his mouth get dry. He had come a long way through the woods, which no longer seemed so terrifying, and had met a very wise friend. He knew that now he needed to find his way home and fill his stomach. “Zelda, it’s time for me to go home.” “Well, it was nice to meet you,” replied Zelda. Boris pranced gaily back to the Hamm Fam. He had no trouble following the trail home and was surprised how differently the trip back felt from the trip out. It seemed shorter, clearer, and less foreboding. Relaxed, his gait surefooted and carefree, Boris wondered for a moment why the trip home felt so different, but he quickly pushed aside the question at the first sight of home. 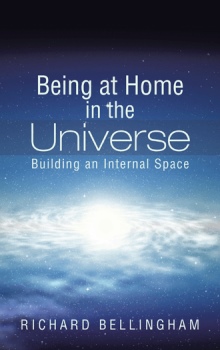 Being at Home in the Universe
Richard Bellingham
$11.95 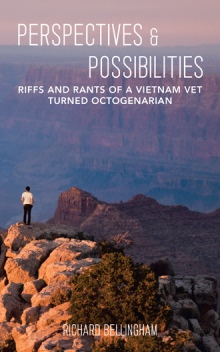 “Just one more Boris story.” This was the nightly plea I heard from my daughter just before bedtime. It meant another opportunity for me to conjure up a tale based on her experiences and my imagination that might help her sort through a question from her day.

Boris is a mythical character, a dog that happens to be experiencing the same life challenges as Rebecca did when she was eight to ten years old and every problem seemed like an overwhelming conundrum, or at least a terrific drama opportunity. While Boris initially had the same feelings and thoughts as Rebecca, he was always able to find the possible solutions that existed, no matter how hopeless the situation appeared through the eyes of a young girl.

The Boris fables are beloved because they are entertaining and also enable children to get a little distance from their concerns. They can get a new perspective on their world without feeling that they are being lectured to or that “parental advice” is being imposed. Boris is the perfect medium to share “un-discussable topics” and to discover creative solutions to problems. Most importantly, the stories serve as a stimulus for engaging in meaningful conversation about important life issues.

Richard Bellingham earned a BA in Marketing, an MA in Counseling and a Ed. D. in Counseling Psychology, all from Western Michigan University. He has written more than a dozen books on leadership, wellness, and change as well as being a successful keynote speaker. He lives in Summit, New Jersey.