by Inge Auerbacher & B U Gilbride 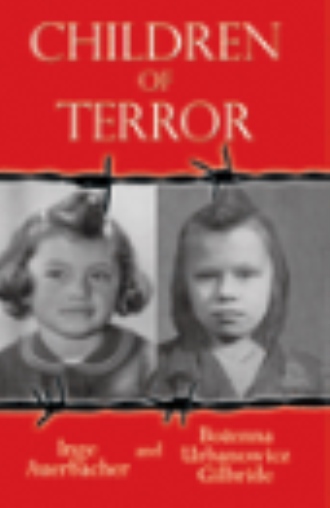 This book is an "Honorable-Mention Awardee 2015" from Readers Favorite under Non-Fiction/Autobiography category.

Two very young girls, one a Catholic from Poland, the other a Jew from Germany, are caught in a web of terror during World War II. These are their unforgettable true stories.

"War does not spare the innocent. Two young girls, one a Catholic from Poland, the other a Jew from Germany, were witnesses to the horror of the Nazi occupation and Hitler’s terror in Germany. As children they saw their homes and communities destroyed and loved ones killed. They survived deportation, labor camps, concentration camps, starvation, disease and isolation."

“This is a moving personal account of history. Urbanowicz and Auerbacher’s painful pasts and similar experiences should guide us to make correct decisions for the future."

“Most Holocaust survivors are no longer with us, and that is why this volume is so important. It is a moving testimony by two courageous women, one Catholic and one Jewish, about their youthful ordeals at the hands of the Nazis. They succeed in ways even the most astute historian cannot — they literally capture history and bring it to life. It is sure to touch all those who read it.”

“Such an original book, written jointly by both a Jewish survivor and a Polish-Christian survivor of the Holocaust, Children of Terror points the way toward fresh insight, hope and redemption. If “Never again” is to be more than a slogan, tomorrow’s adults must be nourished and informed by books such as this. A fabulous piece of work, perfect for the young people who are our future.”

“The authors were born in the same year but into different worlds: one a Polish Catholic and the other a German Jew. Despite their dramatically different traditions and circumstances, they shared a common trauma — the confusion and fear of being a child in wartime. Auerbacher and Urbanowicz vividly describe the saving power of family, place, and tradition. Young readers of Children of Terror will come away with a deeper understanding of the Second World War and a profound admiration for the book’s authors.”<p>

David G. Marwell, Ph.D., Director of the Museum of Jewish Heritage — A Living Memorial to the Holocaust

Inge Auerbacher was born in 1934 in Kippenheim, Germany. She was imprisoned from 1942 to 1945 in the Terezin concentration camp in Czechoslovakia. She immigrated to the United States in 1946, and currently lives in New York City. Auerbacher graduated from Queens College in New York City with a Bachelor of Science degree in chemistry. She worked for thirty-eight years in medical research and clinical work. She is retired and travels to many countries to speak about the Holocaust and about tolerance. Author of: I Am A Star — Child of the Holocaust Beyond the Yellow Star to America Running Against the Wind Finding Dr. Schatz — The Discovery of Streptomycin and A Life It Saved Highway to New York Honors and Awards: • New York State Senate Woman of Distinction, 2009 • Among the first honorees into the New York City Hall of Fame, 2007 • Honorary Doctorate of Humane Letters from Long Island University, New York City, 2005 • Ellis Island Medal of Honor, 1999 • Louis E. Yavner Citizen Award, 1999 • Queens College of the City of New York Alumni Star, 1998 • Many other citations of honor from various governmental agencies Bożenna Urbanowicz was born in 1934 in Leonowka, a small town in the far eastern province of Wolyn, Poland. In the 1940s, she — along with her parents, brother and two sisters — were transported first to Freiberg, Germany, and then to the Chemnitz Labor Camp, where they remained for the duration of the war. After the war ended, her family, with the exception of her mother, joined relatives in America. They did not see their mother until several years later, when she found them and came to America. Urbanowicz studied draping, fashion design and sewing in high school and earned her living in the fashion industry. She is married to Richard V. Gilbride and has four children and three grandsons. She spends much of her time traveling in America and abroad, telling her story of surviving the Holocaust of World War II. Honors and Awards: • Commission member of the Founding of the Nassau County Holocaust Learning Center • Recipient of the Louis E. Yavner Award by the New York State Board of Regents, Department for “Outstanding Contribution to Teaching the Holocaust and other Violations of Human Rights” • Ellis Island Medal of Honor • Member of the U.S. Holocaust Memorial Museum, Washington, D.C., where she donated artifacts and gave testimony as a Polish Catholic Holocaust survivor • Raised funds for the Zegota Monument in Warsaw, Poland • Awarded “Honorary Righteous Gentile” Medal by the Polish president of Righteous Among Nations, Jerzy P. Sliwczynski • Received three “Cross of Merit” medals from three Polish presidents • Associate producer of the documentary Zegota, Council of Aid to Jews in Occupied Poland 1942-1945 • Served on the National Polish American-Jewish American Council • Contributed her story to Professor Richard C. Lukas’ book, Forgotten Survivors • Board member, Catholic League for Religious and Civil Rights, Long Island Chapter • Thirteen other awards, commendations and certificate of merit from senators, congressmen and local civic leaders