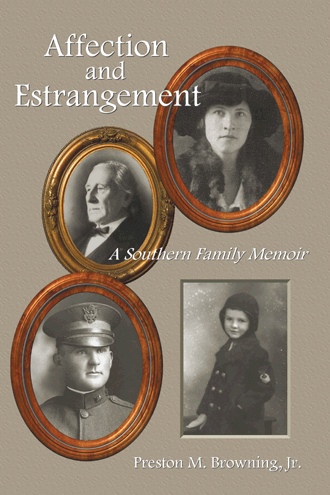 Affection and Estrangement; A Southern Family Memoir is a memoir with a difference. As the title indicates, the major focus of this volume is not an account of my growing up in a small town in rural Virginia in the 1930s and 1940s, but, rather, descriptions of various members of the extended family and of the social dynamics of this very Southern community. I do, of course, write about my own experiences in the Browning family and in the Culpeper, Virginia community. But the core of the book is a gathering of more than twenty sketches of relatives I knew as a child and adolescent, some exceedingly eccen- tric, and the Southern ambience which, in a very true sense, created them—and me. In order to provide a context for my descriptions of cousins, great aunts, grandparents, etc., I have written about the three features of Southern society which, in my judgment, were most distinctive of life in that region of the country during the decades of my youth—race, religion, and class. My intention has been to offer the reader intimations of how being Southern contributed to the peculiarities of the family members about whom I write, including my parents, and about how class differences, for example, featured in the dynamics of my immediate family, as well as in the lives of several members of the extended family. Because my maternal grandmother, Cornelia Cabell Stephenson, was descended from two relatively distinguished Virginia families—the Cocke and Cabell families—and because a good deal of primary and secondary material dealing with these families exists at the Alderman Library at the University of Virginia, several of the sketches are about members of those families. However, because my discussion of my great-great-great- grandfather, General John Hartwell Cocke, and his second wife, Louisa, are of considerable length and are heavily dependent upon secondary sources, these pieces might more accurately be described as essays. In reflecting upon the ways my own life was shaped by the society in which I was raised, I have stressed four factors: 1) The influence of an often harsh and repressive Calvinist religious milieu characteristic of the entire South, which, while it did not impact me directly (we were Episcopalians and hence less subject to the preaching about sin and damnation which our Baptist neighbors regularly endured), nevertheless had, I believe, a deleterious influence upon my developing sense of self. This was particularly true with respect to my confused feelings about my body and adolescent sexual urges. 2) The major influence of the natural world on my developing sensibilities and ethical values. Living in the country and spending my summers working on my father’s farm created in me a deep love of Nature and was profoundly instrumental in shaping the person I became, one passionately committed to the preservation of the Earth and its beauties. 3) The role of my parents’ example in their respectful treatment of black people in their employ in shaping my attitudes toward race. The “estrangement” I indicate in the title of this volume grew, in part, out of my difficulty in reconciling my Christian ethical values with racial attitudes and practices in the Jim Crow South of the thirties, forties, and fifties. 4) The presence in the South of my youth of distinctive social classes and the conflicts within my family occasioned by the class differences.

Preston Browning Jr. entered the world in 1929, a few months before the Crash and the onset of the Great Depression. In Culpeper, Virginia, Browning grew up amid the pervasive poverty of the times where he recalls being labeled by his father as the world’s worst grouch, led in song by Miss Lizzy Lovell—who banged on the piano at the local Episcopal church, and seated astride a cow who needed a lot of convincing to take him for a ride around the pasture beyond his house. With humor and exceptional detail, Browning shares a lively memoir that focuses on his coming-of-age journey and subsequent experiences in the rural South during the 1930s and 1940s, providing a compelling glimpse into how his family and others helped shape his emerging sense of self, his convictions, and his character. While providing snippets about the era and sketches of more than twenty relatives and ancestors that include an amusing retelling about his Uncle Sweets’ experiences at a hoochie-coochie show, Browning details the fascinating legacy of his Southern upbringing during a time when a struggle for racial, economic, and social justice prevailed in America. In this inspiring memoir, a Southerner reminisces about small-town Virginia before, during, and after the Great Depression through entertaining stories about his unconventional ancestors, his immediate family, and his own experiences.