Defenders of the Scroll 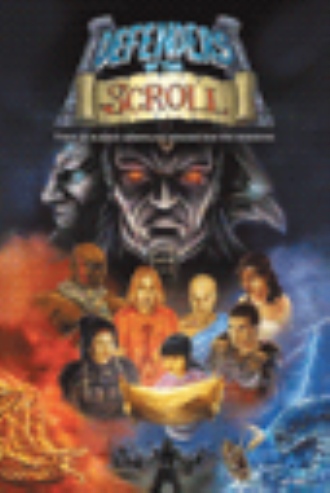 The snapping of a branch drew Alex’s attention back to the forest. A guttural growl followed as a pair of glowing yellow eyes appeared in the trees, and then another set appeared. Slowly, a large canine head pulled free from the darkness with a second head close by it. Both snarled at Alex, and only when they came a few paces farther, did Alex see that both heads shared the same body—a body as big as his own. “Now I know I’m dreaming,” he muttered. The chink of metal sounded as the dog’s chain was pulled back. Someone was holding it, someone big. As his huge legs came into view, Alex thought it was an ogre. Twice his height, it was certainly big enough to be one. The hairy creature wore animal-skin clothes and had an ugly, caveman-like face with two big fangs protruding from its lower jaw. When Alex saw that it too had two heads, he corrected himself. “Ettin. Crap.” “I’ll need a sword,” he said, and then he willed one to appear in his hand. This was a dream after all. But no sword magically sprang forth. Things began to feel far too real for Alex. Dream or not, they needed to get out of there. “Dara?” he checked. She had moved herself right behind him. “Yes, sir?” “Run!”

Shiraz was raised just outside Toronto, Ontario and like the characters in this book, currently has no home. His life as a software developer has allowed him to live on four continents and keeps him moving almost every year. While he has had a passion for writing since he was eight, this is his first published work.