One Family's Story of Life on a Sabbatical--Europe, Istanbul, Bethlehem 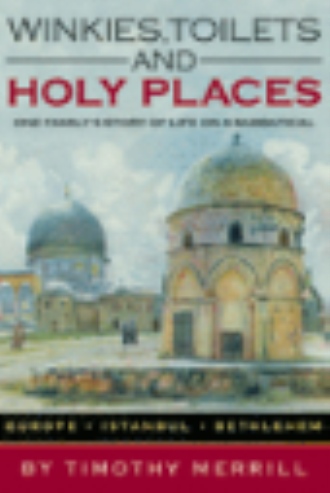 Sally came up and introduced us to our “bread” man. We never learned his name. To us he was always the Merhaba Man, “merhaba” meaning “hello.” We learned that he would be here every morning and that a loaf of bread, a baguette, cost 25 cents and if we had some shopping to do, he would do it for us. He’s paid by the mission to do this. It’s what is done here in Turkey and the mission does their part. He also sweeps around the building some.

One night after we’d finished dinner, Jeanie raised a question about the bread.

“What are we going to do with all this bread?”

It was a good question. We got baguettes every morning. Two feet long (actually that would be about a half meter long, and 60-70 centimeters around). That’s a lot of bread. We simply couldn’t eat all the bread the Merhaba Man was bringing. Spenser had two round crusty pieces on one finger of each hand and was twirling them creatively. I pretended to ignore him and came up with a suggestion: “Two words,” I said.

“Two words?” Jeanie asked. “And what would those two words be?” Spenser stopped goofing around in mid-twirl.

“Yes, bread pudding. I love bread pudding. You can use the crusts and it doesn’t matter if the bread is dried out. So as we accumulate a bowl full of extra bread and heels and crusts, we’ll toss in some eggs, sugar, cinnamon and raisins and have bread pudding.”

“Except no raisins,” Taylor suggested.

“Yes, raisins,” I said firmly, countermanding his idea. “You can’t have bread pudding without raisins. It’s the raison d’etre for bread pudding in the first place.”

The family was quiet.

“Get it?” I asked. They looked at me like I was speaking another language. “You learned this when we were in Paris. Raison. D’etre. Reason for being. A little play on words. We need raisins in our pudding because they’re the raison d’etre of pudding.”

They got up from the table and left me there counting the “raisins” why I even bother trying to expand the canon of knowledge and enlightenment in this family. I didn’t come up with many.

What others are saying about Winkies, Toilets and Holy Places :

A classic travel tale, with adventure, misadventure, and curlie-q unexpected turns in the road. But more than that, it’s a voyage in which a family discovers what matters most to them — across America, and Europe, without a dime to spare — this is not the travel of pretty picture books: from marital squabbles to homesick children, from a haunting island monastery to the pure pleasure of simple farmhouse fare. They travel moment to moment — some, staggeringly beautiful — gently swinging in cable car above the Swiss Alps — and others, staggeringly real, as when the cable car ride makes one of the boys sick to his stomach, with nowhere to go. All of this, Merrill recounts with the gentle humor of an experienced pastor, the wavering resolve of a stepfather, and the openhearted joy of a man rekindling his wanderlust. Read this tale if you’re seeking a window to the Europe not of guidebooks and picture books, but of human hearts finding that home is everywhere.

—Paul Shepherd, former Writer-in-Residence and Kingsbury Fellow at Florida State University, whose debut novel, More Like Not Running Away was the winner of the 2004 Mary McCarthy Prize in Short Fiction.

TIMOTHY MERRILL is the Executive Editor of Homiletics (www.HomileticsOnline.com), a preaching resource for clergy; he is also the Founder and Editor of HomeTouch (www.HomeTouchMinistry.com) and is the Editor of ParentTalk, a publication of the Shanghai American School. He is the author of books published by Abingdon Press, Chalice Press and CSS Publishing. For many years in parish ministry, for the past 12 years, Timothy has been writing and publishing for a religious audience. He and his wife, Jeanie, make their home in Shanghai, China.

The son of a preacher, Timothy became a preacher himself, studying at Iliff School of Theology (Master of Arts in Religion--Historical Theology) and Princeton Theological Seminary where he was a Ph.D. candidate in Church History. His dissertation, not completed, was a study of the role of apocalyptic preaching in the propagandizing of the Crusades. He has written a lengthy, and unpublished novel, based on his research of the First Crusade.

Timothy and Jeanie love their life in China, but make frequent trips back to the U.S. to visit family and friends. They enjoy spending time at their cottage in Seal Rock on the beautiful coast of Oregon.