The Dark Ages of My Youth 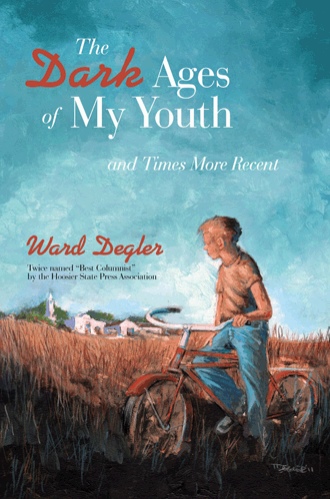 In 1943 the Princess Theater was as close to heaven as any 10-year-old boy was likely to get. It was a sanctuary, a safe haven from the brutal realities of school, chores, and, of course, a world war that raged so far away but at the same time seemed so close and was so frightening. It was here on Saturday afternoons that we lined up on the sidewalk clutching our dimes in fevered anticipation of imminent immersion in a double feature, three serials and four cartoons. In its entire history, the Princess showed nothing but westerns, although back then we called them Cowboy movies. All of our heroes were there: The Lone Ranger with his faithful Indian companion Tonto, Roy Rogers with Dale Evans, the Durango Kid, Red Ryder, Lash LaRue, Gene Autry, Hopalong Cassidy, and – my idol – Tom Mix. There wasn’t an Oscar nomination in the lot back then, and the plot of one movie was predictably similar to the plots of all the others. There were the bad guys, of course, and they almost always wore black hats. The good guy always came out of nowhere and he almost always wore a white hat. There were the town folks or the hardworking ranchers who were being victimized by the gang and who were sadly powerless to do anything about it. Then the good guy showed up and helped the town folks find their own inner strength and defeat the bad guys. After that he always rode off into the sunset, usually after bidding fond farewell to the school marm or the rancher’s daughter. Secretly, we shared the hope of the townsfolk or the rancher that he would stay and take over the ranch and maybe marry the school teacher. But we knew he had to leave so he could rescue the next town and the next ranch from the bad guys. That’s what good guys did. Looking back I realize I sat there every Saturday, hunkered down in my seat, my feet propped up on the seat in front of me, and I always knew what was going to happen next. As a matter of fact, every kid in the place knew what the bad guys were going to do next and what the good guy was going to do in return. We knew, but we didn’t care. The point was that every Saturday these movies proved to us that good outweighed bad 10 to one; that in spite of an unfair war out there, good would always triumph in the end. Moreover, after the last bad guy had bitten the dust, the good guy had ridden off toward the horizon and the house lights came back on, we were amply fortified to spend the next week carrying that message of faith and hope. For the next seven days I could be Tom Mix, reassuring a frightened world that everything would be all right. We moved away from that little town and the Princess Theater just before the end of 1943. A couple of years later the war ended and the country set about the business of building a future. I guess that future just didn’t include places like the Princess Theater. After all, the war was over, prosperity glowed brightly on everyone’s horizon, and we just didn’t need to be reminded anymore that good would prevail over evil. I stopped going to Saturday matinees and began looking forward to high school. After awhile they stopped making cowboy movies like that, and all the good guys rode toward the sunset on final time and disappeared. At some point, the Princess Theater closed down. Folks I talked to said it was a frozen food locker plant for several years. Later, somebody named Carson turned it into a meat market. When Carson closed down, somebody else used the building as a warehouse for a while. After that, the building stood empty. Near as I could find out, no one has used it for anything since. But I defy anyone who ever scoured up a dime on a Saturday afternoon and sat through a Tom Mix double feature to stand on the sidewalk outside that ruined building today and deny hearing the distant thunder of hoof beats and the feeling deep within that everything is going to be all right.

When Ward Degler graduated from journalism school, his mother speculated he would become a world-famous war correspondent or, at the very least, editor-in-chief of an influential newspaper. He did neither. Instead, he became a columnist, giving him the opportunity to write about subjects that interested him while avoiding everything that didn’t.

In The Dark Ages of My Youth, Degler shares a selected collection of the weekly columns written for the Times Sentinel in Zionsville, Indiana, from 1993 to 2010. The essays explore the way things were, where we’ve been, and where we are going. He reveals the challenges of an eight-year building project that was supposed to be completed in three months. He narrates his bafflement in dealing with the world’s most headstrong dog. With humor, he details the foibles and dilemmas of everyday living. And, he profiles the special people who have altered and enriched his life.

From the simple to the complex, from the sublime to the silly, The Dark Ages of My Youth takes a charming walk through both the past and present.

Ward Degler earned a journalism degree from the University of Missouri and worked for a daily newspaper and the Associated Press before joining the private sector. A veteran of both the US Army and US Navy, he wrote a weekly column for sixteen years for the Times Sentinel in Zionsville, Indiana. Degler lives with his wife, Jeanne, in Zionsville.