THE CIRCUS INSIDE OUT

by Victoria B. Cristiani Rossi 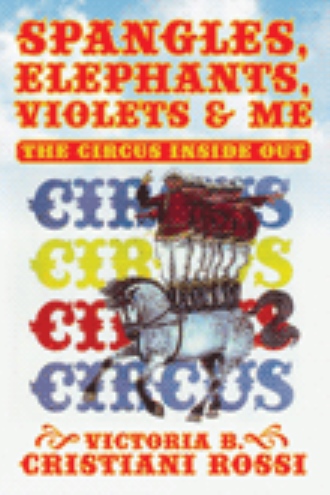 Spangles, Elephants, Violets & Me is a moving and revealing journey back to the playground of Victoria Cristiani Rossi’s youth. It is, quite simply, one thought-provoking train ride—one that involves fairy tales, nightmares and miracles. Victoria describes the tempestuous world of her Internationally Famous Cristiani Riding Act family (former Ringling Bros. and Barnum & Bailey superstars), her life-altering convent experiences, starting at age six, and her near-fatal accident under the big top in Los Angeles. There are fascinating glimpses of Emmett Kelly, Karl Wallenda, Hugo Zacchini and disgraced 1950's quiz-show contestant Charles Van Doren.

Spangles, Elephants, Violets & Me is also a story of the American dream, the confluence of wealth and fame, the strength and frailty of family, social and economic ambition, misplaced trust, conflict, loss and redemption. Victoria’s gift for writing is most evident as she builds dramatic contrast between days spent happily on the circus lot, and haunting nights spent away from it.

Employing her authentic voice and role in circus history, Victoria honors an institution often caught publicly and unfortunately between its defenders and detractors, a situation that can preempt enjoyment of its true reason for being, or appreciation of the circus industry’s numerous contributions to American culture.

The glorious and colorful, if not always great, days of the big top live on in Victoria Cristiani Rossi's intelligent new memoir, Spangles, Elephants, Violets & Me. Victoria shares her life under the big top and away from it—from her first year at a convent boarding school when she is six years old to age nineteen when she is hurled from the trunk of a performing elephant before a capacity crowd, teeming with Hollywood celebrities. With the healing perspective of years, she recounts her family's conflicts, triumphs and struggles, and adventures as circus owners, amid shifting public taste in popular entertainment—an era that reflected the best and the worst of times as Victoria grew into adulthood. Born into the Internationally Famous Cristiani Riding Act Family, from the canvas “womb" of the Ringling Bros. and Barnum & Bailey Circus of the 1940's, Victoria is an eyewitness to a world now "nowhere to be found." But she captures that world and its era with powerful and lyrical imagery. With respect and frankness, she allows the circus to be what it was, and is—an amazing, complex community, an inventive state of mind, and a place of enduring entertainment and fascination.