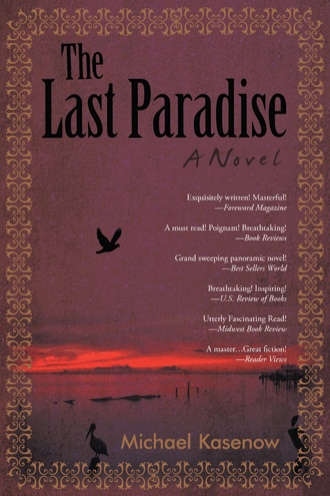 Glorious in scope, The Last Paradise follows the downtrodden and oppressed people of Galveston, Texas, through trials of injustice and bigotry in post-Civil War America. Debut novelist Michael Kasenow artfully weaves a tapestry of vivid and historic detail in this inspiring story of strength and survival.

During the beginning of the twentieth century, the alley people in Galveston band together against racism, prejudice, and poverty hidden within the hypocrisy of civic and corporate corruption. Men and women such as Fanny, Maxwell, Newt, Bishop, Elma, the prostitutes and nuns of St. Mary’s, and the puckish poor who hang out at Bleach’s Tavern journey through self-discovery in their attempt to find their places in the changing landscape of a modernizing world.

The men and women of the alley refuse to capitulate to the rich and privileged, drawing instead upon their inner strength and character instilled by their upbringing in frontier America. Yet they fight to be the free men and women demanded by their courageous spirits, even in the midst of turmoil.

Rich with stunning depictions of turn-of-the century Galveston and the devastation wrought by the Great Hurricane of 1900, The Last Paradise illuminates resilience and fortitude of the great city itself, brought about by the same strengths held by its common citizens. Humorous, evocative, and sobering, this breathtaking novel is an adventure that encompasses the human soul.

Michael Kasenow is a novelist, poet, and scientist, and is currently a geology professor at Eastern Michigan University, where he teaches Environmental Science. He is the author of twelve environmental science books published internationally by Water Resources Publications. Kasenow lives in Michigan.