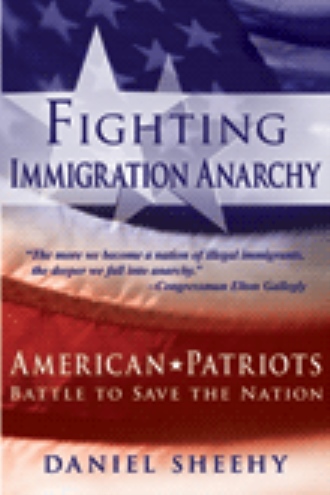 A groundswell has been steadily building in America among citizens who are fed up with seeing our country overrun by millions of illegal aliens — foreign invaders who defy our laws, disrespect our culture, and refuse to learn our language.

These citizens became activists when they saw that, if America is to survive as a nation and culture, her people will have to save her, because an out-of-touch Washington establishment has grown too corrupt to defend the land and Constitution that hundreds of thousands of Americans have died to preserve.

Fighting Immigration Anarchy focuses on the struggles of eight citizen activists to awaken their fellow Americans to the encroaching danger. Through the individual stories, readers learn about the recent history of illegal immigration in America — the political victories and defeats as citizens awoke and fought back against the open-borders juggernaut.

This book is a warning for all Americans of the chaos spreading rapidly from the southwestern border zone to every corner of the nation. In its wake have come massive job displacement for American workers, increased crime, schools overwhelmed by non-English-speaking students, bankrupt hospitals, and other serious problems. And these newcomers have not come to join the American community through assimilation, as did legal immigrants in the past, demanding instead that we change our culture to fit them.

Daniel Sheehy’s communications career has spanned broadcast and print journalism, corporate communications, and public speaking. He first worked as an assistant news producer and writer for WBAL-TV in Baltimore while completing his studies at Towson University in Maryland, where he received a bachelor’s degree in mass communications. Afterward, he worked as a business reporter at Aviation Daily in Washington, D.C. Later, Sheehy worked as a corporate communications manager, writer, and editor for United Airlines, TRW Space & Electronics, and other companies. He has been a guest on numerous radio talk shows and spoken to scores of organizations about immigration and plans for a North American Union. He lives in Southern California.