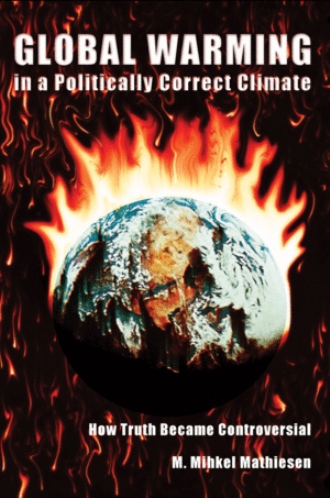 "Societies unravel when they lose the glue that holds them together."

The opening words of Global Warming in a Politically Correct Climate reveal author M. Mihkel Mathiesen's passionate struggle to reveal how the truth has become controversial in the modern community. Mathiesen explores the paralyzing effect political correctness has on society and the associated environmental scares the public has accepted as fact for 30 years.

Contrasting the exaggerations and glib explanations of politicians, advocacy groups, and bureaucracies, Mathiesen provides a clear and revolutionary account of the actual science behind five major environmental campaigns. As the title indicates, Mathiesen's work culminates in a relentlessly objective analysis of the real causes of the present global warming.

Based on the latest scientific findings, Global Warming in a Politically Correct Climate contains densely packed information never before published in a format accessible to the non-scientist. With the forgiving veil of political correctness lifted, the roles of advocacy groups, bureaucracies, politicians, industry, the legal profession, and career-conscious scientists are examined. Mathiesen particularly scrutinizes the media.

Global Warming in a Politically Correct Climate is an enlightening look at how the transfer of wealth from an unwitting public is justified by averting non-existent threats, and how greed rather than pure idealism is at work in environmental politics.

M. Mihkel Mathiesen obtained his masters degree in metallurgy at the Royal Institute of Technology, Stockholm, in 1974, and completed his academic studies in Sweden and Japan in 1978. An energy and environmental scientist with a knack for explaining complex scientific issues with ease and clarity, Mathiesen?s writing and lectures have increasingly come to dominate his working life. He lives, writes and ponders the world's follies in Westport, Massachusetts.