by Michael I. Dexter 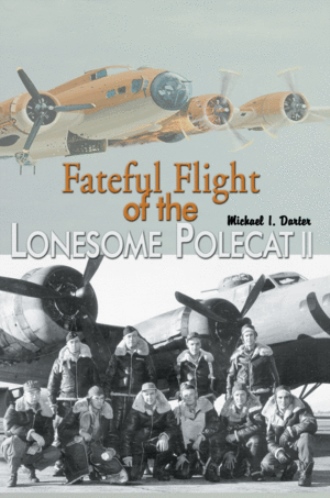 For 60 years the author felt much anguish and yearned to discover what happened to his only brother, S/Sgt. Eugene F. Darter, who enlisted in the Army-Air Force after Pearl Harbor and was assigned to a B-17 crew. Just before departing for England and never to be heard from again, his brother came home and carried his newly born brother through the neighborhood on a pillow.

Over the years attempts to locate information were of no avail but the initial bonding of brothers did not diminish. Then in 2000, through a World War II B-17 web site, a summary of the aircraft's missions and a list of the 10 crewmates were discovered.

An intensive investigation was set into motion beginning with a shocking conversation with the crewmate who found his wounded brother in the burning aircraft and helped him bail out. Beyond all belief, eyewitnesses were located on a Dutch island (Texel) that saw Eugene parachute through the mist and also saw his badly damaged B-17 roar over their heads 60 years previous. Then just prior to a memorial honoring the crew in May 2007, a piece of the B-17 was found on the Texel beach, and additional pieces were discovered since then. In 2009 the former wife of the lead pilot was located, she is 90 years of and had known all of the crew. She was in possession of a detailed letter written by a crew member just after the war that describes in detail the horror of combat on the plane. A PBS special is now underway on this search for the MIA.

Michael Darter is an Emeritus Professor of Civil and Environmental Engineering at the University of Illinois and a Principal Engineer at ARA, Inc. He received his PhD in Civil Engineering from the University of Texas at Austin and went on to become an international authority in transportation infrastructure engineering. The search and discovery of what happened to his brother and other crew members continues with major recent discoveries and the preparation of a PBS special. Darter believes that nothing he has achieved in engineering surpasses the joy and satisfaction of discovering what happened to his older brother.