The Theory and Practice of Pan-African Economic, Racial and Cultural Self-Preservation 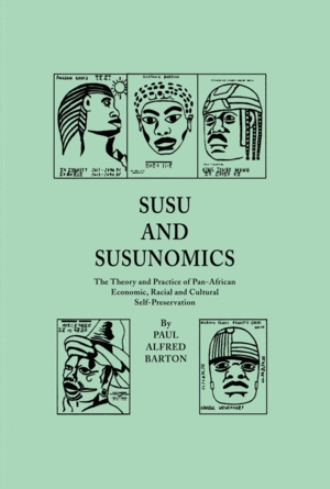 Susu and Susunomics: The Theory and Practice of Pan-African Economic, Racial and Cultural Self-Preservation is one of the most powerful and effective books ever written on one of the oldest economic systems practiced. The Book is the second part of the Susu series. It discusses the practical means of developing what is required for the building of strong economic, social and cultural power in African-America as well as the rest of the Black world and the world of those striving to improve their economic, social and cultural conditions.

Susu and Susunomics shows how communities such as refugees from World War II Europe and Afro-Caribbean people have used susu and economic nationalism to build up collective and individual wealth through unity, cooperation and the pooling of their resources. Susu and Susunomics discuses the form of susu economics practiced by Koreans, Black West Indians and others.

It also stresses the point that in many northern cities beginning as early as the 1620’s, Blacks were developing in parity with whites until slavery was officially established during the 1680’s, a move that was illegal. The use of susu in the Southern U.S. and the building of strong, thriving, economically stable Black communities is also part of the evidence in this text.

This book deals with a number of very important issues of significant important to the Black communities worldwide. Some of the issues include: creating a tax and job base; the attitude needed to be successful; economic racism and stopping it; susu banking and building a susu economy; workers and the susu system; pooling money to buy banks, factories, lands and other assets; stopping population control and managing a strong, growing population; Susuism and independence; the Black male and rebuilding the Black family and a number of very important issues and solutions.

Family oral history connects our family to an Ethiopian royal line, from Gondar, Ethiopia and the Pre-Columbian Black Caribs of the Caribbean. I am a student of history, business management and economics. I attended Fresno Pacific University and Fresno State University. I received a Bachelors Degree in Business Management. I am the author of three books and I have written many articles for newspapers and magazines.