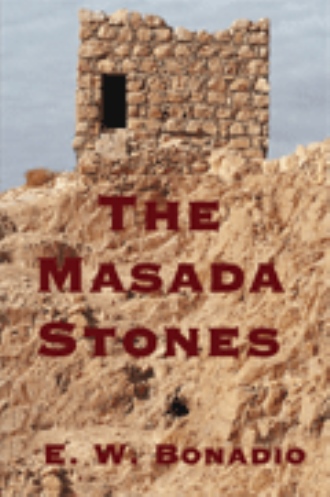 Then suddenly, with a low guttural growl, the twice-pierced zealot leader got back onto his feet. Fighting back the effects of the drink, he said, “I am Eleazar ben Yair, leader of the dead.” His wounds bled freely, and as his lungs filled with blood, he cursed again, mere gurgles, now unintelligible and weak. As his lips parted, blood spilled from his mouth. With clenched teeth, and in a final display of hate and anger, he pulled a small blade from his tunic and tossed it toward an unsuspecting soldier in the first rank. The blade caught him in the upper thigh and he fell to the ground in pain. A command came from the rear. “Enough! Kill the zealot now.” As ordered, a lone Roman spearman came out from the rank. The rebel punched the air with his fist. In a final display of rage, he turned to rush the man but slipped off the side of the earthen ramp. His body rolled down twisting and turning as it made its way to the valley floor. The leader’s broken remains came to rest at the bottom of the causeway. Elezar ben Yair, the last zealot fighter was dead. A Roman centurion remarked, “We stand witness to the death of a brave man. Forget his curses; he was not himself. He did not try to run nor plead for his life. He deserves our respect. We will take his broken body to General Silva for a proper burial. Today we are victorious; however, tomorrow is never certain.” ********* Masada, the site of Herod’s summer palace, was a mere shell of its former glory. Prior expeditions uncovered and carted away many major architectural structures at the site. However, there remained evidence of sophisticated tile work, ornamental columns chiseled from nearby stone quarries, and the occasional bits of pottery and articles of daily wear found on university-sponsored digs. The stair-step palace at the end of the escarpment was, in effect, a series of barren structures. Other ruins on the plain of Masada failed to meet the eye of antiquities hunters because they lacked valuable tile work and adornments. The granaries and nearby storage facilities had held little interest since the extensive mid-sixties dig. A Coptic Christian church replaced one of the small palaces at the western midpoint of the summit. Erected nearly a century after the siege, the church represented the advancement of Christian influence throughout the region. Excavations included the first century zealot’s meeting hall. This site became a shrine to global Jewish resistance, and the Israeli government spent years developing Masada as a major tourist attraction. The main gates and the western rampart were the most heavily excavated. The state displayed both military and daily use artifacts at Museums in Jerusalem and Tel-Aviv and the Israeli Army used the site of Masada for ceremonial purposes. For Aaron Skorsky, only the truth about Masada mattered. His research and training had little value without a finding or an artifact that proved his theory. Time was running out for Skorsky and he knew it. Only a major find could keep his theory alive.

For his entire life, professor Aaron Skorsky has searched for the truth. Finding it near the heights of Masada, he learns that the account of a mass suicide by 1000 Hebrew rebels may have been falsely reported. After 2000 years, an ancient alchemy used by the Romans against the rebel zealots lays unclaimed. Finding it is only half the problem and soon Skorsky finds that he must choose between revealing a threat to mankind or saving the life of someone dear to him. Caught in the middle of an Israeli plot and desperate measures by Arab terrorists who want to expose them, Skorsky has little choice but to bend to the higher power.

Previously published author, E.W. Bonadio was born in Baltimore, Maryland, the adopted home of Edgar Allen Poe. An avid fan of Stephen King, Dean Koontz and Wilbur Smith, he enjoys exploring the unknown. Moving west in 1986, the author presently lives in the Phoenix area. He took up the writing pen in 1999 with his first novel, Voices, and continues writing short stories, essays and developing new ideas for a next fiction novel.